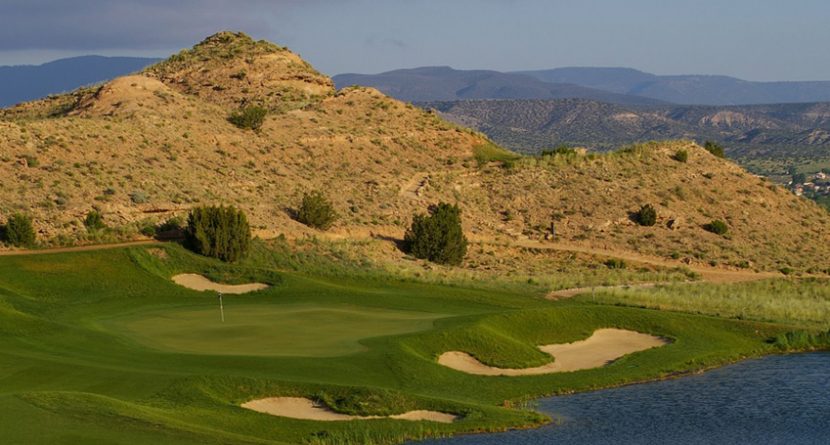 ESPANOLA, N.M. – People always ask me why their favorite course set near the ocean or surrounded by mountains or running along scenic canyons isn’t ranked higher than they feel it should be, and I always give the same response. There is far more to a golf course than its natural setting.

The difference between a truly great golf course and a merely pretty good one is the design of the holes. It’s the undulation in the greens, or the horizontal sweep of fairways around hazards, or holes with multiple angles of attack. A truly great golf course is not just a doctrine of framing, center-line, “look how pretty” stroll. After all, Winged Foot, Oakland Hills, and Oakmont don’t have ocean or canyon views, do they?

That’s a shame because although, yes, Black Mesa is one of the country’s most visually striking golf courses – wedged between the Sangre de Christo Mountains on one side and the Jemez Mountains on the other – it’s outstanding architectural design features are what keep at the top of the public ranking lists, including some of the best greens in American public golf. “I’ve always said it would be worth the price of a greens fee just to see this property and walk around it,” said architect Baxter Spann, who actually looked to another adventurous and underrated golf course for inspiration before designing Black Mesa: Mike Strantz’s Tobacco Road, near Pinehurst, North Carolina.

“I had seen photos of The Road in magazines and thought it looked fantastic. Then I got the chance to go there for an agronomy seminar, so we played it was the weekend after Payne Stewart died (shortly after he’d won the 1999 U.S. Open),” explained Spann. “It was such a  paradigm shift in architecture!  The scale of the features – massive – was bold, yet well integrated with the surrounds and tremendously wide fairways; there was nothing formulaic at all, a great dynamic golf course. And best of all, Strantz employed the ‘line of charm,’ the concept where if you took the direct line to the hole, you had to challenge and carry a deep, imposing hazard.”

“Blind shots add a 3-dimensional element of strategy. You can make blind shots strategic by making Position A have a clear view of the green, but a poor shot have the target partially or fully blocked – just like at National Golf Links of America.  The further off line you are, the less you can see your target.  Some people dismiss that as quirky, but it’s really the essence of golf.”

With the significant elevation change to Black Mesa’s terrain, Spann only had to move 100,000 cubic yards of earth to design a course that ascends and descends one of the wildest dunescapes in golf. “What Tobacco Road convinced me to do was leave the great landforms as they were, instead of bulldozing them and designing a boring, doctrine of framing course that spoon-feeds you what to do. Take a hole like 14. Instead of bulldozing the huge hill on that short, drivable par 4, it is, instead, the hole’s main strategic feature. Drive over it or around it…or short of it, but then you have a semi-blind shot. You have to think about what to do, and then execute, and that’s what makes a great golf hole.”

Two other great examples include the short par-4 seventh hole, where a ridge on the left will either help you get to the green if you hit a good shot, but will block you out if you hit a poor shot. Moreover, the severely canted fairway, from left to right, tests a golfers ability to play off uneven lies, a lost art in this age where we wrongfully paint such great architectural tricks as “unfair.”

The course’s other great achievement is the greens.

“The setting is so remarkable, Spann could have designed 18 flat greens and people would still love it,” explained golf course architecture expert Tony Korologos. “But the marvelous greens, with all their undulations take it from just a pretty face to one of the best designs in America.”

So next time you’re spending all day looking at how pretty the surrounds are, take a few minutes to look at the holes themselves.  You might find you’re missing a great golf course.