The Trees of Oak Hill: Dr. Williams Planted Them, And They Came 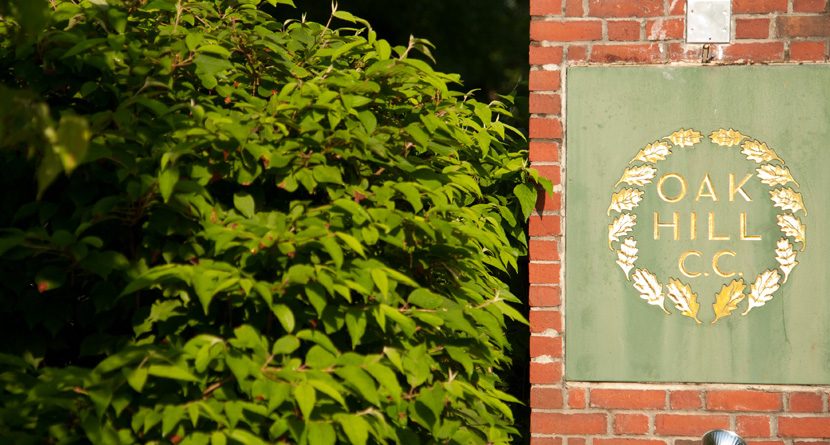 In the 1989 movie Field of Dreams, an Iowa farmer (played by Kevin Costner) hears a haunting voice emanating from his corn field:  “If you build it, he will come.”   Defying rationality, he builds a baseball field which ultimately lures Shoeless Joe Jackson and the 1919 Chicago Black Sox from their ethereal realm.

Perhaps Dr. John Williams of Rochester, N.Y. heard a similar voice in 1926 when Oak Hill Country Club agreed to a land swap with the University of Rochester and relocated from its tract adjoining the Genesee River to a barren and virtually treeless farm in Pittsford.  Williams proceeded to immerse himself in horticulture and spearheaded a forestation campaign that led to the planting of 75,000 oak, maple, elm, and evergreen seedlings across the 355-acre parcel, leaving just enough space for the 36 fairways and greens of the two 18-hole courses designed by Donald Ross.

Although trees generally were not integral to Ross’s designs, the famed Scottish course architect and the amateur Rochester botanist achieved a sublime symbiosis at Oak Hill.  Longtime Rochester golf writer and Oak Hill historian Sal Maiorana commented that “as you walk the grounds of Oak Hill today, you can’t help but gaze skyward at the majestic trees that dominate the landscape.  They soar to the heavens, lending both an unmatched beauty and a treacherous detriment to one’s scorecard.”

Thirty years later, a la Field of Dreams, they (the USGA) came to Oak Hill to stage the 1956 U.S. Open, and were so enthralled by Ross’s splendid and demanding East Course that they (and the PGA) have kept coming back ever since.  Oak Hill has hosted three U.S. Opens, two PGA Championships, two U.S. Amateurs, a Ryder Cup, and just for good measure a couple of senior majors.   Ernie Els remarked after the 2003 PGA Championship: “It is the best, fairest, and toughest championship course I’ve ever played in all my years as a professional.”   Heady praise, indeed, from someone who has played the all of the best.

The PGA Championship returns to Oak Hill for the third time this week, and, if previous championships contested over the arduous East Course are any indication, the world’s best players will have their hands full threading shots between Dr. Williams’ trees and deciphering Ross’s diabolical greens.  Fans hoping to see a lot of red numbers on the leaderboard are likely to be disappointed.   In the five Majors played at Oak Hill to date, only ten players have finished under par.   Clearly, the East Course has stood the test of time:  Ben Hogan’s 64 in 1942 still stands as the course record, albeit fittingly tied by Curtis Strange when he won the Open in 1989 and became the first person to win back-to-back Opens since the “Hawk” himself in 1950-1951.

While somewhat off the beaten path in upper state New York, in a city better known for producing cameras and film than championship golf, there has been no shortage of history and drama at Oak Hill.   In its inaugural U.S. Open in 1956, Dr. Carey Middlecoff edged out Hogan by a stroke after the steely-nerved Hawk uncharacteristically missed a 30-inch” putt on the 71st hole.   In 1968, Lee Trevino won for the first time on the PGA Tour in the U.S. Open at Oak Hill, finishing four shots ahead of Jack Nicklaus to become the first player in history to record four sub-70 rounds in the championship.

Oak Hill was kinder to Nicklaus in 1980.  Determined to bury the moniker of the “Olden Bear” and dismiss critics after going winless in 1979, the Golden Bear bounced back with a vengeance and capped his U.S. Open victory at Baltusrol with a record, field-lapping 7-stroke win at the PGA Championship.    It was a fitting site for Nicklaus’ fifth PGA Championship, matching the record of Rochester native Walter Hagan who hosted the first tournament at Oak Hill in 1934.

In 2003, a less luminary figure took home the Wanamaker Trophy.  Shaun Micheel, a virtual unknown who was winless in 163 starts and said he would have been thrilled just to make the cut, nailed a 7-iron from the rough on the 18th hole to within 2 inches of the hole to clinch the championship.   A plaque now commemorates the site of the famed shot.

Eight years earlier, Oak Hill had captured the attention of the entire golf world when it hosted the 1995 Ryder Cup.   The European team rallied from a two-point deficit on Sunday to win the Cup as a succession of prominent United States players could not buy a par on the treacherous closing holes of the East Course.  Strange, who six years earlier had prevailed so thrillingly at Oak Hill, could summon none of his old magic as he bogeyed the last three holes to hand a critical point to Nick Faldo.  Then Jay Haas’s double bogey on the final hole of the last match sealed the Americans’ fate.

Kerry Haigh, the PGA Managing Director for Championships who oversees course modifications and conditioning for PGA Championships, is excited about returning to Oak Hill this week.  “It’s a beautiful test of golf which is steeped in history and presents all sorts of challenges,” he remarked.   “There’s not a weak hole on the golf course.  We’re also very appreciative of the great support we get from the club and the community.”

Haigh observed that, collectively, the 17th (a  495-yard uphill par 4) and 18th (a 488-yard par 4 featuring a valley in front of the green) present one of the most difficult finishes in golf.   “There’s so much history there,” he noted, alluding to some of the dramatic championship finishes at Oak Hill.

The East Course will look much the same as in 2003.  Haigh explained that the greens on the 5th and 6th holes have been rebuilt to achieve consistency with the other greens, and that the lake on the 181-yard par-3 15th hole has been modified to bring the water hazard more into play.   “It’s a more attractive hole now,” said Haigh.   And more dangerous!   Head PGA professional Craig Harmon remarked that players missing to the left of the green will be lucky to keep their pitch shots on the green and out of the water.

As in previous championships, Haigh expects that the perplexing, bent-grass greens will run extremely fast, and that the thick bluegrass rough will penalize wayward tee shots.   “The quick greens will test the best players in the world,” he said.  “It’s just a really challenging, exceptionally tough golf course.  Every hole is tree-lined.”

One has to believe that Dr. Williams would have taken great pleasure in seeing all his trees playing such a decisive factor in major championships.   He planted them, and they came.

Jack Ross, a regular contributor to New England Golf Monthly, is on-site at Oak Hill this week.  This article was adapted from an article that appeared in Arnold Palmer’s Guide to the 2012 Majors.

Related Link: 3 Things To Do in Rochester | PGA Championship Scripting