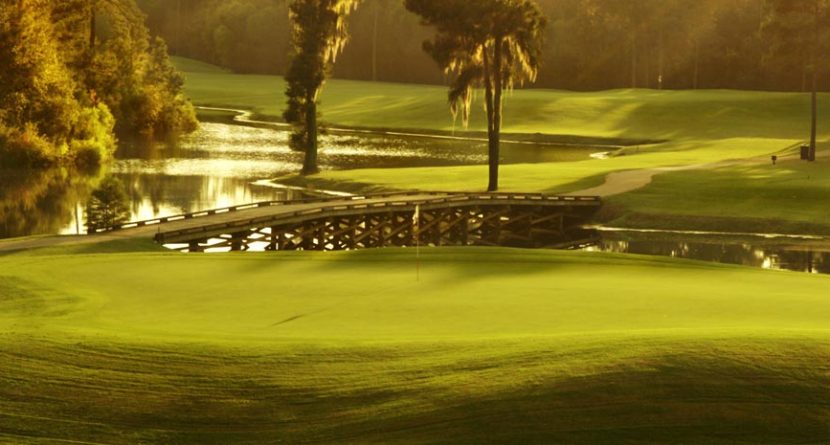 It’s very easy to fall under the spell of The Witch, one of the most challenging, beautiful golf courses in Myrtle Beach, S.C.

The superbly conditioned Witch is actually part of a triumvirate of Myrtle Beach courses — also including Man O’ War and The Wizard — owned and operated by Mystical Golf, which specializes in value-driven stay-and-play packages. The three outstanding, distinct courses were designed by renowned course architect Dan Maples, who did a masterful job of weaving the 6,796-yard, par-71 Witch through 500 acres of pristine property, most of it natural wetlands filled with numerous species of beautiful flowers and plants.

The environmentally sensitive Witch, which opened in 1989, is considered Mystical’s signature course. Even the 4,000 feet of raised wooden bridges traversing The Witch’s wetland areas, lakes and Waccamaw Swamp are environmentally sensitive. The Witch’s tee markers, which resemble pointed witches hats, are actually pointed stumps of cypress trees collected from the swamp comprising much of the front nine.

The Witch’s tough front side winds magically through serene cypress groves and wetlands. The opening nine is not only much longer than the back — 3,589 yards compared to 3,207 — but carries over wetlands and around doglegs are plentiful, so accuracy with the driver and irons is key. Holes separated by deep, forested swaths provide the sense you’re alone on the course. I particularly like this nine’s closing three holes. The 186-yard seventh’s green is guarded by water in front, left and right. The 599-yard eighth, the course’s longest hole, must be navigated away from the swamp hugging the left and right sides of the fairway and the 376-yard ninth’s fairway is essentially an island amid the wetlands, so the drive and approach are all carry to terra firma.

The back nine — which offers a completely different, more-open feel — also gives golfers a stern test over rolling terrain that adds to The Witch’s mystique. While the swamp doesn’t encroach on inward-half hole corridors, forced carries over water or wetlands do factor on five holes in one form or another. My back-nine favorites are the 425-yard 15th, where the approach must carry wetlands, and the dogleg-right, 382-yard 16th and 388-yard 18th, both of which feature a handful of well-positioned mounds that can affect long drives.

Don’t be surprised if you spy bald eagles, cranes, alligators, deer and black bears keeping an eye on you during your round. It’s all just part of The Witch’s mystique.

The Lowdown: The Witch