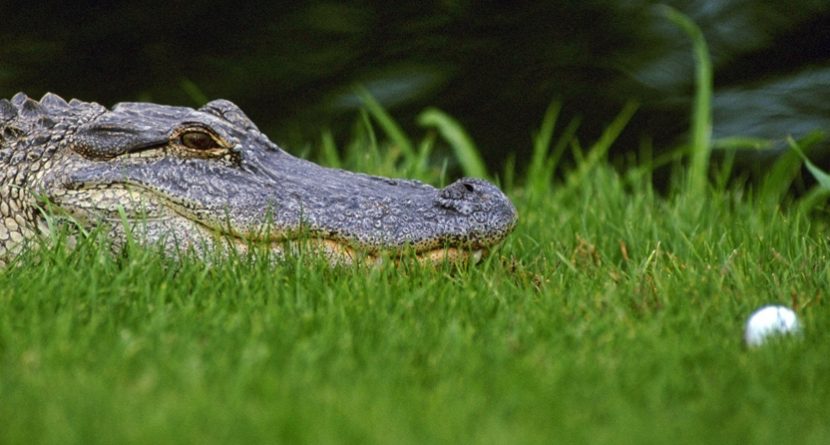 When you think of dangerous sports, it is highly unlikely that golf is anywhere on that list. Auto racing, sure. Bull fighting? Absolutely. But golf? The relationship between golfer and crocodile has long been a tempestuous one. Recently there was an incident out of Cancun, and of course the famous Chubbs Peterson incident from “Happy Gilmore.” But besides that, what perils could befall a golfer during their round? Volcanoes? Land mines? Yep. Those are just a few of the things that make these the 9 most dangerous golf courses in the world:

“What could be more enjoyable than playing a round of golf at an 18-hole desert-style golf course surrounded by spectacular views across South Africa’s wilderness?” asks the website for the Lost City Golf Course in Sun City, South Africa. I’ll tell you what, not getting eaten by Nile Crocodiles, that’s what. The 13th hole is filled with them. You’ll want to take at least one extra club to help defend yourself from the cold-blooded hazards that await you around that green. But hey, like your caddy or your mother, I can only make suggestions.

Known as the toughest par 3 in the world, the “19th” hole at Legends Golf and Safari Resort in South Africa is also pretty dangerous. One false move and you’ll plummet to your death. Maybe it’s my fear of heights or flying, but if you’ve got to take a helicopter to the tee box and hit off the end of a cliff, it’s pretty harrowing. On top of that, only one person has ever made par on the hole and that was Back9’s own Padraig Harrington in 2008.

There are some people who don’t mind being around crocs, so perhaps they need a little more danger to keep them off the links. How about land mines? That’s right, land mines. Sure, the Camp Bonifas course isn’t so much a course; really, it’s just a 192-yard par 3 (in the middle of a demilitarized zone) on a South Korean military base. But the green is surrounded on three sides by mine fields. Like, actual, don’t-step-on-me-or-you’ll-blow-off-a-limb-land mines. Hell bunker doesn’t seem so scary now, does it? In Hawaii, you can play golf and visit active volcanoes. In Indonesia, you can do both simultaneously! The Merapi Golf Club is nestled right at the base of Merapi Volcano and, for those of you who (unlike me) aren’t amateur volcanologists, it is one of the more active volcanoes on earth. Smoke can be seen billowing from the top of the cone nearly 300 days out of the year and it erupts fairly regularly, most recently in 2010. A round at Merapi will most likely yield some awesome vacation pictures, but remember, if you’re in the wrong place at the wrong time, it’ll be one of the more awkward phone calls home you’ve made in a while. Playing this course isn’t necessarily dangerous, unless you’re fully aware of just how dangerous geologically unstable land really is. For instance, Yellow Stone National Park is a super volcano capable of destroying most of the northern hemisphere and creating nuclear winter at any moment … bet you didn’t know that either, huh? Okay, maybe I’m a little paranoid, but it must be a bit strange smelling sulfur all afternoon. In addition, there are a number of geysers around the course which, clearly, are free-drop areas — unless you want to risk walking across an active geyser. Your choice.

Despite its location, Prison View Golf Club is a public golf course. That being said, there are a number of special rules and guidelines for playing there, like required background checks and consent to search vehicles or your person at any time. Oh, and tee times can be canceled at any time and play suspended at the discretion of the Warden. Sounds like a good time, yeah? Any time your course has staff hired to have “an eye on the area to keep away dangerous game,” you’re probably in for a round that will either be the time of your life, or the end of it. While it should be noted that no golfer has ever been harmed during a round, the website also claims that a lion once killed a buffalo on the first green and a pack of wild dogs chased an impala (not the car, the antelope for which it’s named) around the course, disrupting and probably scaring the hell out of golfers.

Hailed as “the world’s most exclusive golf course,” Pyongyang Golf Course may also be the easiest. Kim Jong Il (allegedly) shot a 38 with 11 aces during a round in 1994. The par-72 also hosts an amateur tournament each year, the Democratic Peoples Republic of Korea Amateur Open in July. Anyone can attempt to enter but remember, if you’re chosen, you have to go to North Korea. You may not think that a course with such high acclaim as Half Moon Bay could be considered deadly, but in August of this year a man plummeted more than 100 feet off a cliff and sustained critical injuries. Sure, he survived, but falling 100 feet is no joke. If a golf course with wild animals roaming the course can make the list, one with 100-foot drops close enough to the course for players to fall off of them has to.