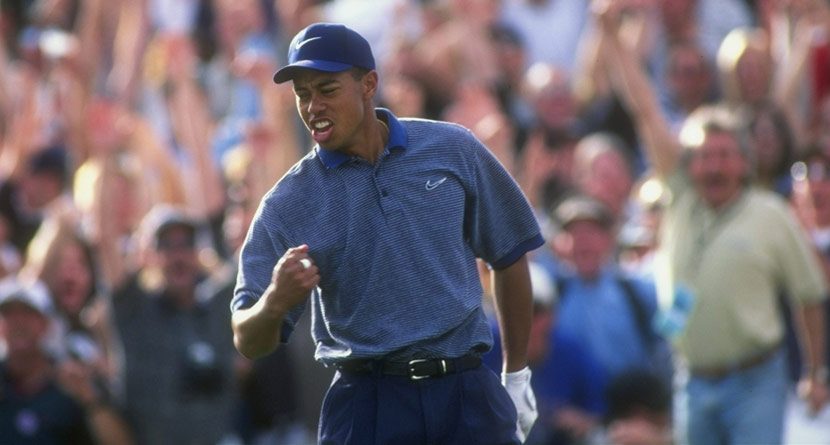 The Waste Management Phoenix Open is the PGA Tour’s largest-drawing event and provides some of the most exciting golf, electric atmospheres, and collections of enthusiastic fans on the tour — mostly due to the circus that is the 16th hole. For 51 weeks out of the year, the 16th hole at the TPC Scottsdale is public domain and a relatively easy par-3. Measuring only 165 yards, it’s not a long hole by any stretch of the imagination, but during the Waste Management Phoenix Open, it becomes a monster; one of the most pressure-packed shots a player will hit all year.

Really, who wouldn’t feel the pressure of thousands of eyebballs watching you swing a golf club, knowing those people are going to boo you mercilessly if you miss the green? No. 16 at TPC Scottsdale wasn’t always the marquee attraction during the Phoenix Open, but like most things in the game, that all changed once Tiger Woods showed up. Woods was already drawing massive galleries everywhere he went when he buried his tee shot at 16 during the 1997 Phoenix Open in front a gigantic crowd just waiting for a reason to go berserk.

The buzz that Woods created with his ace at 16 was obvious by the incessant roar — from the point of impact until he walked off the green amidst beer cans and cups being hurled onto the tee box as he walked away. Apparently, everyone thought this rock concert atmosphere was something the game of golf needed, because with each passing year since Tiger made his ace, the “stadium hole” has grown and grown into the full-blown circus it is today. Now, you don’t even need to be a prodigy or world No. 1 to raise the roof at 16. Just ask Australia’s Jerrod Lyle, who carded an ace there in 2011.

It’s not all sunshine and rainbows at 16, however. If you hit a bad shot, the same crowd that was jubilant and complimentary just moments ago will turn, raining down boos hard and fast on anyone, regardless of skill level or accomplishments in other arenas. Just ask Olympic icon Michael Phelps, who, in seconds, went from receiving the welcome of a homecoming king to that of the high school principal trying to calm down a group of rowdy students during a pep rally.

There are, of course, a couple people who very rarely (if ever) encounter the boo birds. There are plenty of players who pander to the masses by passing out swag from their sponsors, throwing gloves and golf balls to the ravenous pack with the hope of swaying their allegiances. But the ones who really seem to get a pass with the patrons are local favorites like Arizona State alum Phil Mickelson. He receives insane roars from the Phoenix crowds every time he plays. In 2013, he whipped the capacity crowd into a frenzy with his near hole-in-one. Mickelson also shot 60 during the week and went on to win the event for the third time.

The players aren’t always the ones causing the uproar at 16, either. Until last year, the caddie races were a huge part of the excitement at the stadium hole. Heck, they even had an app where fans could predict the winners of the races and win prizes. The tour has cited caddie safety as the reason for putting an end to the races, but for those interested in doing a quick YouTube search to see what you’ll be missing out on this year, the ones from recent years are pretty entertaining. From brothers racing each other to a dueling dives to the  finish line (and a couple wipe outs in between) the caddie races were always serious entertainment.