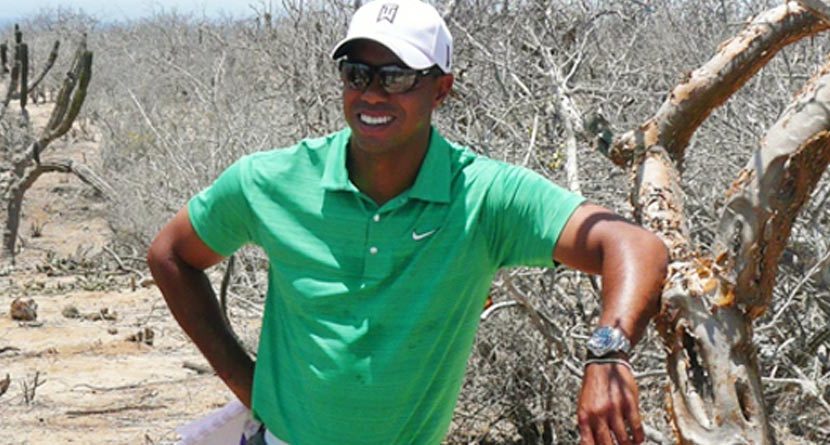 Tiger Woods may not be making progress towards getting back into tournament action as quickly as he might like, but his course design project in Cabo San Lucas, Mexico, is another story.

Related Link: Tiger, Vonn Help Each Other Through Rehab

“My golf course design project in Cabo, El Cardonal at Diamante Cabo San Lucas, continues to progress well. The front nine has been grassed, as well as a few holes on the back nine,” Woods wrote last week in a blogpost on his website. He continued by saying he looked forward to getting back onsite — and that’s where he is this week. On Thursday, Woods took to Twitter and Instagram to give us a just a little taste of what the course, scheduled to open in the fall of this year, is looking like at this stage of the project:

Thrilled with how things are turning out at El Cardonal diamantecabo http://t.co/vzVjCEfquy

While Woods is still focused on completing the Diamante project in Cabo and getting back in action on the PGA Tour, he’s also looking forward to another design project, slated to get underway this summer in Houston, Texas.

“I’m also excited about my newest design project near Houston, Bluejack National. My team and I have been working on this for quite some time, and I’m really looking forward to construction starting this summer,” Woods wrote in his blog. With the success of his course building enterprises happening concurrently with his rehab, Woods has kept up quite the schedule despite not being on course. According to his blog, the next tournament he plans to attend is the one he hosts each year, the Quicken Loans National at Congressional. Woods hopes to return to competition by the Open Championship in July at Royal Liverpool.