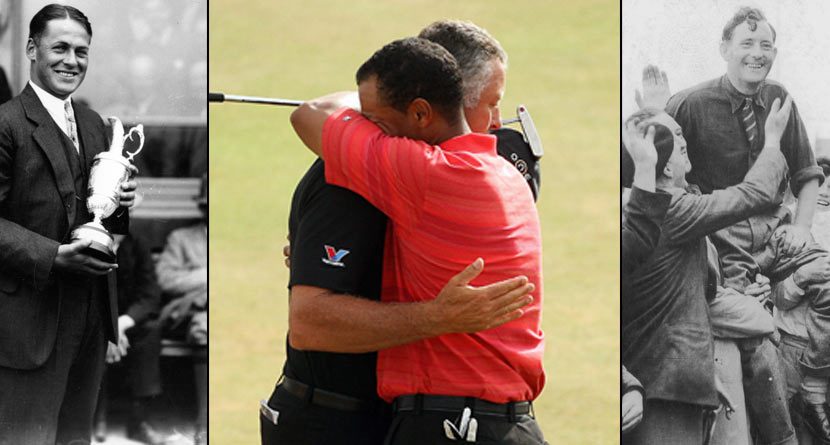 The Open Championship returns to Royal Liverpool Golf Club in Hoylake this year for the first time since 2006. It also marks the 12th playing of The Open at the club. Over the years, Royal Liverpool has played host to some very memorable moments. Here’s a look at the 9 best:

Few professional athletes have ever had the type of public relationship with their father that Tiger Woods had with his dad, Earl. He was always looming somewhere around the 18th green on Sunday, waiting for his son to close out his major victory. At the 2006 Open Championship, however, Earl wasn’t there for his customary victory hug. The elder Woods had passed away two months earlier.

Tiger played great all week at Royal Liverpool, setting a new course record with a 65 on Friday en route to his 11th major championship. This time, after Woods made his final putt, his embrace was with caddie Stevie Williams. Woods sobbed into Williams’ shoulder, realizing for the first time that his dad was not there to celebrate his triumph with him.

The Open Championship is known as one of the hardest tests in golf. Oftentimes, the winner’s score is hovering around even par. Since 1938, The Open has seen 19 winners finish with scores of 2-under or worse. That wasn’t the case in 2006. No, that was the year it seemed like everybody went low. Graeme McDowell fired an opening-round 66 to set the course record at Royal Liverpool, a record that stood for only a couple of hours. On Friday, Tiger Woods, Ernie Els and Chris DiMarco all broke that record with rounds of 65. Sergio Garcia matched that mark in the third round. At the end of the week, Woods hoisted the claret jug, winning by two strokes over DiMarco and finishing the week a whopping 18 under par.

In June 1930, Bobby Jones came to Hoylake as the reigning British Amateur champion. He’d already collected 10 major victories, and at 28 years old was in the middle of a historic accomplishment that no man had and no man since has ever accomplished: the grand slam. He was tested at Royal Liverpool but held on to win by two strokes over American Leo Diegel.

Jones returned home to the United States with the first two legs of the grand slam in hand. He would win the U.S. Open at Interlachen in July and then finish off his legendary run in September at the U.S. Amateur. Since Jones, no amateur has won the Open Championship and no player has won the grand slam.

Coming into the 1947 Open Championship, no Irishman had ever won the tournament. That 76-year winless drought was snapped by Northern Irishman Fred Daly, who held on to win by one stroke over Englishman Reg Horne and American amateur Frank Stranahan.

Daly’s win in the Open Championship is significant for a number reasons. It was the only major title for Daly, who played on four Ryder Cup squads over the course of his career. He never attempted the Masters, U.S. Open or PGA Championship. For his country, the win was even more important. Not only was it the first, it was the only Open Championship won by an Irishman until 2007, when Padraig Harrington won at Carnoustie. It was the only major ever won by a Northern Irishman until Graeme McDowell claimed the U.S. Open in 2010.

In 1924, Walter Hagen won his second Open Championship and the fifth of 11 career majors. To that point, he was still the only American ever to win the event. In the fifth Open to be held at Royal Liverpool, Hagen held on to defeat Ernest Whitcombe by one stroke. Hagen would go on to collect two more Open Championships before the end of the 1920s during an unprecedented run that saw either he or Bobby Jones win seven of nine Opens.

Before there was Tiger Woods and Jack Nicklaus, before Bobby Jones and Walter Hagen, there was J.H. Taylor. Few players dominated their era more than Taylor did at the Open Championship from the late 1800s through the turn of the century. Taylor won five Open Championships, tied with Tom Watson and Pete Thomson, and one shy of Harry Vardon’s six titles. His last came at Royal Liverpool in 1913, when defeated Ted Ray by eight shots.

As part of The Open rota, Royal Liverpool held 10 Open Championships from 1897 to 1967. After that, however, the club didn’t host the event again until 2006. In the last installment before the new millennium, Roberto de Vicenzo won his major. The Argentine, who is perhaps most famous for losing a chance to win the Masters by signing an incorrect scorecard in 1968, won more than 200 times as a professional around the world. On the biggest stage, however, he was only victorious once — at Royal Liverpool in 1967. What made de Vicenzo’s win even more special was that he beat the best ever to do it. The 1967 Open Championship was one of 19 times Jack Nicklaus finished runner-up.

Pete Thomson was a force to be reckoned with during the 1950s, especially on the links of the United Kingdom. Thomson was already one of the most successful Australian golfers in history when he came to the Open Championship at Royal Birkdale in 1954. He won that year, again in 1955 and finished his run of three Open titles in a row at Royal Liverpool in 1956. No one has won three straight since. In 1957, Bobby Locke beat Thomson by three shots, winning at St. Andrews and interrupting his run. But Thomson would win four Open Championship titles in five years.

In 2012, Royal Liverpool opened its doors to the best female golfers on the planet when it hosted the Women’s British Open. It was 36th Women’s British Open and the 12th that counted as a major championship. Jiyai Shin dominated, besting runner-up Inbee Park by nine strokes.