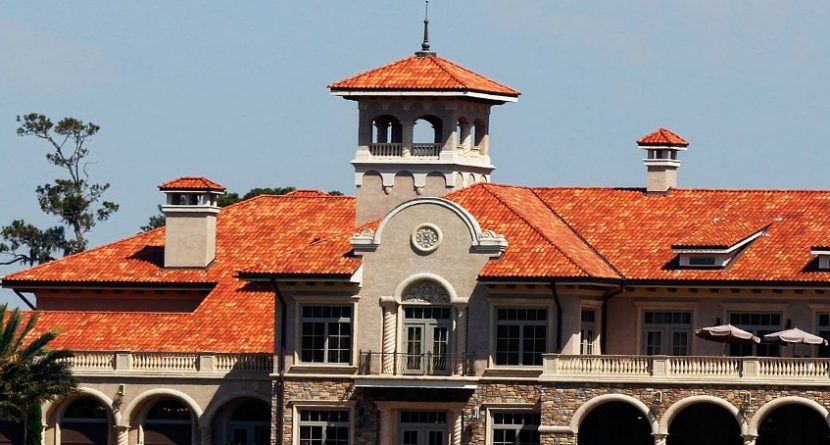 There might be no better destination for star-struck golfers than the Sawgrass Marriott Golf Resort & Spa in Ponte Vedra Beach, Fla.

The Marriott is the host hotel of the adjacent TPC Sawgrass and its The Players Stadium and Dye’s Valley courses, both open to the public, with the Stadium hosting the annual The Players Championship. PGA Tour headquarters and numerous tour professionals call TPC Sawgrass home, so you’re almost guaranteed to spy at least a few famous golfers either inside the 77,000-square-foot Spanish-style clubhouse or on the massive practice facility.

While that creates enough playing opportunities for a great golf trip itinerary, the undisputed No. 1 reason golfers flock to Ponte Vedra Beach, Fla., is to tackle the Stadium Course and perhaps golf’s most-famous, or infamous, hole — the island-green, par-3 17th. The 7,215-yard, par-72 course (a whopping 76.8/155 course rating/slope from the tips), which opened in 1980, underwent a major, 14-month renovation in 2007-08. The Stadium features a plethora of outstanding holes that don’t get much airtime during The Players Championship, with the 583-yard ninth, 558-yard 11th and 523-yard 16th being a few of my favorites. My Marriott room had a pretty good view of the outstanding 181-yard 13th, with water flanking the entire left side of the hole, creating a major pucker-factor tee shot. One afternoon, I watched five foursomes play the hole, with 17 of the 20 finding the water with their tee shots. The next day my tee shot found the right greenside pot bunker and I considered my bogey a moral victory.

Conversely, I own the 137-yard 17th, perhaps the world’s most-photographed hole. The first time I played the Stadium was with three co-worker buddies, and none of us was tearing it up as we arrived at the 17th tee. Amazingly, we all found the island green. The others made pars and I drained an eight-foot birdie putt, making my day.

I played my second Stadium round two years later, this time as a single paired with Bob, a major-airline pilot and a strong player with vast senior amateur tournament experience. We both played well and safely reached the 17th-hole putting surface with our tee shots, albeit both about 30 feet from the hole. Bob thought we could both do better, so, since we were the last group on the course, he suggested we each hit another shot. Well, we each proceeded to hit 16 balls —that’s 32 total, for the mathematically challenged — in the water. We both parred the hole on our original balls, but unfortunately that was my only remaining ball.

The 17th hole obviously gets the lion’s share of the limelight, but assuredly the intimidating 462-yard 18th is not a hole you want to attack with one dimpled spheroid left in your bag. The dogleg-left, guarded by water down the entire left side, is a staggering finishing hole requiring two perfect shots to a tricky putting surface abutting the lake. Bob immediately yanked his drive into the water — his 17th consecutive wet swing — then pulled out his last ball and made double-bogey, while I limped in with a bogey.

Don’t overlook Dye’s Valley course, which is very underrated because of its sibling’s international reputation. Dye was assisted by Bobby Weed and player consultant Jerry Pate in designing the 6,864-yard, par-72 beast, which opened in 1987. I actually found the Valley (74.1/137) a tad more difficult than the Stadium. Perhaps that’s because the first round I played there, as a 2 handicapper at the time, I double-bogeyed eight holes — five on the front nine.

While the Valley has wider fairways and bigger greens than the Stadium, water comes into play on 14 of the Valley’s holes, and the course is exacting enough to have held many prestigious events, including the Senior Players Championship (1998-1990), the Web.com Tour’s Winn-Dixie Jacksonville Open (2010-2012) and Tour Championship (this October), the final stage of the Champions Tour Qualifying School and the NFL Golf Classic.

Despite its potential bite, Valley does have several reachable par 5s — the 500-yard eighth and 499-yard 17th — and since Valley gets less play than the Stadium, you can expect fewer golfers and a faster round.

If you only have time to play one of the other six off-property courses and love a challenge, head five minutes directly across Highway A1A to the Ed Seay-designed, 27-hole Sawgrass Country Club, which hosted the first five Players Championships from 1977 to 1981 on its East/West combined nines. After the world’s best golfers annually bitched the course was too difficult thanks to relentless wind and water affecting play on 24 of the 27 holes, then-PGA Tour commissioner Deane Beman moved the whiners and the tournament across the street in 1982 to the world’s first true stadium course and the first of many TPCs to come.

The fact is, The Players Stadium Course remains the gold standard of all the TPC layouts. When you tee it up at the Stadium and Valley courses, bring a positive attitude, a sense of adventure and sense of humor, and you’ll feel like a star yourself, no matter how you play. Just be sure to pack plenty of pellets.

• A number of stay-and-play packages are available by visiting www.sawgrassmarriott.com/promotions.