Travelers Championship: Three Up, Three Down 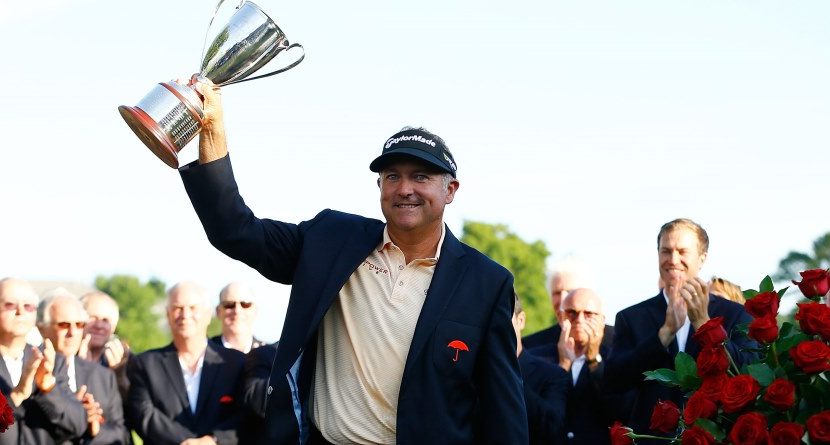 Another Travelers Championship, another first-time winner. Forty-four-year-old Ken Duke walked with the $1.098 million prize Sunday, the sixth man to collect his first PGA Tour win in the event’s past eight years.

Classic finish, too. Duke sat in the clubhouse with a 12-under 268, all but assured of receiving the Travelers trophy. Then 31-year-old Chris Stroud, also seeking his first career PGA victory, chipped in from 51 feet for birdie on his very last hole. That brought him even with Duke, who respectfully fist-bumped Stroud following the shot.

The two made par on the first playoff hole, then Stroud’s drive put him in better position on the second. But Duke stuck his approach shot over a bunker and within three feet. Assured of a birdie, Duke watched as Stroud needed to two-putt, then calmly sank his victory putt.

Including the two playoff contenders, here are three guys who enjoyed a nice weekend in Hartford, and three who are more than happy to move on.

Ken Duke – It seemed to be Duke’s day on No. 10, when his approach sailed wide left but bounced off a branch and settled roughly five feet from the pin. That sent him on a little birdie run, as he also picked up birds at 11, 13 and 15. Previously ranked 144th in the world, Duke was making his 187th career PGA Tour start.

Chris Stroud – It appeared to be Stroud’s day when his miraculous chip forced a playoff, but he can’t complain about the first runner-up finish of his career. The $658,800 makes for his biggest payday ever, and nearly matches the amount he’s earned all season. It’s Stroud’s third top-10 of the year.

Chris Williams – The world’s recent top-ranked amateur made a nice professional debut at the Travelers, settling in with three days under 70 after a 1-over 71 on Thursday. Williams tied for 30th, earning him $32,584 – or close to the salary many of his fellow University of Washington graduates will make in their first year out in the real world.

Bubba Watson – This looked like Watson’s tournament to win as he held the lead going into the weekend, but three bogeys over his last six holes on Saturday dropped him into a three-way tie. Yet the top of the leaderboard was his again Sunday as he reached No. 16. Then he soaked his drive on the par 3. And his shot after the drop sailed the green. To make matters worse, Watson appeared to place the blame on his caddie.

Lee Westwood – The Englishman was right in the thick of things after an opening-round 3-under 67, but he fell back to even after a 73 on Friday. His 69 on Saturday didn’t make waves, but that cringe-worthy 78 on Sunday did. Three final-round double bogeys for the No. 12 player in the world, and this recap on Twitter:

Not had a 4 putt for ages then 2 come along in the same week on the same green! Like London buses!

Hunter Mahan – After a solid T4 at the U.S. Open and an 8-under 62 on Thursday at the Travelers, Mahan looked to be rolling toward his first victory since April of last year. Then he couldn’t stay in the 60s the rest of the week.