U.S. Open Weather Should Be No Surprise 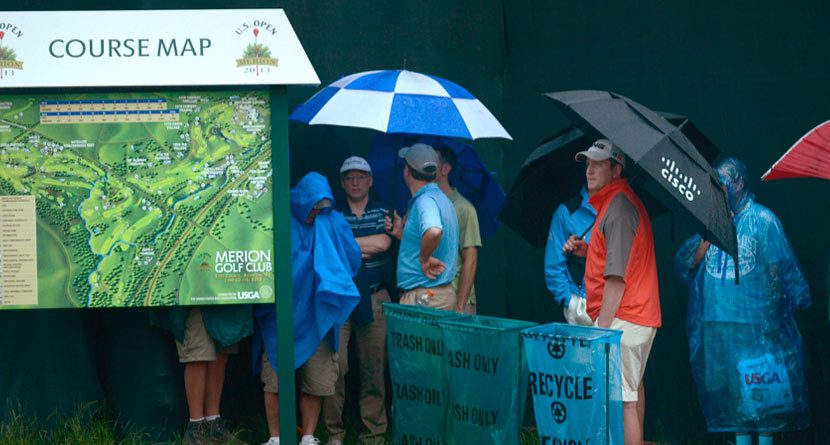 In this golf season filled with weather delays, is it any surprise the opening round of the 2013 U.S. Open was halted on Thursday?

At 8:36 a.m., officials suspended play at Merion, citing severe thunderstorms in the area that would drench a golf course that had already seen some 6.5 inches of rain since last Friday.

Just about one-third of the 156-player field had teed off by the time play was called a little over 90 minutes after the Open began. No group advanced further than their seventh hole on the round. The USGA has announced Round 1 play will resume at 12:10 p.m. ET, but the 3 hour, 34 minute delay will make it impossible for the field to complete play, regardless of when the resumption happens.

Meanwhile, players have had to find a way to pass the time. They were transported over to the adjacent West Course to wait out the delay, though some went to their accommodations for the week to relax in comfort.

Fans, however, had little place to hide from the storm short of the merchandise tent, which likely again sold out of U.S. Open umbrellas, which was the case on Monday, when storms closed the course for four-plus hours. A point of concern for tournament officials is the 11th hole, which serves as the first tee for half the field in the opening two rounds. It sits on the lowest point of the property, susceptible to flooding because Cobb’s Creek runs through it. The USGA has prepared holes on Merion’s West course in the event flooding made No. 11 unplayable, but they have said they did not anticipate needing to go forward with that plan.

This delay is just the latest in a lengthy string of them on the PGA Tour this season. The year began with high-wind warnings in Hawaii at the Hyundai Tournament of Champions. Snow fell in the Arizona mountains, delaying play at the WGC-Accenture Match Play Championship. The Houston Open was pelted with hail in the final round at Redstone Golf Club. The Players Championship was not immune, forcing a long final day to declare Tiger Woods champion.

The Farmers Insurance Open and Arnold Palmer Invitational — both won by Woods — were forced to Monday finishes. The USGA will try to complete the Open by Sunday if at all possible, however, including a 36-hole finale.

The last time a U.S. Open ended on Monday was in 2009, not because of a playoff like the year prior between Woods and Rocco Mediate, but because a similar deluge of rain pushed back play throughout the week at Bethpage Black on Long Island.

Two years later, Congressional was hit by a 1-2 punch of heat and rain, making the immature greens soft and leaving Mike Davis with few options to toughen an exposed venue. Rory McIlroy took advantage, winning his first major championship with a record 16-under tally.

Asked Tuesday about the way rain had softened Merion this week, McIlroy, thinking back to that week in suburban Maryland, admitted he prefers these kinds of conditions over the typical firm-and-fast setup an Open is expected to have.

The world’s top two players are likely champing at the bit to take their shot at an even-more softened Merion. The question now is when.