What It Takes To Win: Byron Nelson Championship 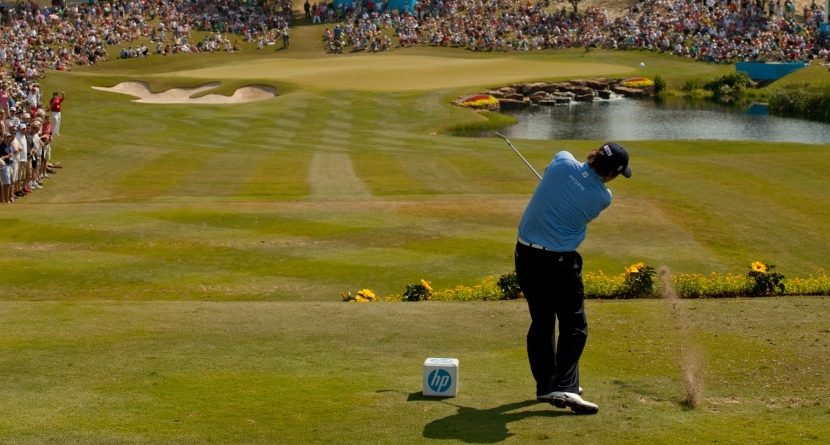 Previous Page: The $120 Breakfast – A Meal For Golfers Everywhere

Don’t fret, golf fans. Jason Dufner is thrilled to be back in the Dallas area this week for the HP Byron Nelson Championship. It’s just that he might be the most unemotional man on the PGA Tour.

If he wasn’t amped to defend the title he won last year, he wouldn’t have been back in town in late March to help promote the event. And he actually drummed up quite a bit of attention while he was there.

On behalf of the Salesmanship Club of Dallas, Dufner appeared at the J. Erik Jonsson Community School, which receives some proceeds from the Salesmanship Club, the group that runs the golf tournament. And while sitting on the floor with some kids, he unintentionally struck a pose that went viral on Twitter.

What can I say, I was tired, my back hurt from sitting on the floor, and we were talking about relaxation and focusing. #dufnering

The good sport that he is, Dufner played along with the Internet meme and – whether he wanted to or not – gained a fair amount of fame in the process. Surely, the 36-year-old is more well known now than he was a year ago, but that hasn’t helped him win anything since last year’s event at the TPC Four Seasons Resort.

Dufner aims to squash that drought as one of the headliners this weekend, and he’ll start in a featured group with Keegan Bradley, the 2011 Byron Nelson champ, and Matt Kuchar, the highest-ranked player in this week’s field.

Dufner grabbed his second career PGA victory when he sank a 25-foot birdie putt on the TPC Four Season Resort’s last hole, edging Dicky Pride by one stroke. It was obviously clutch considering the timing, but also because No. 18 played as the second-toughest hole on the course. It gave Dufner his sixth birdie of the day, and fourth straight sub-70 round.

Players get started with a relatively easy opening hole: a 458-yard dogleg right par 4 that ranked as the 14th-toughest hole in 2012. But the 221-yard par 3 at No. 2 increases the difficulty (sixth-toughest in 2012) right before No. 3, which was last year’s most challenging hole. At 528 yards, it’s a par 4 and accompanied by water on the right for nearly the entire length of the fairway, and features two bunkers left of the fairway and two more protecting each of the green’s front sides.

The par-3 No. 17 is known as the “entertainment hole” considering it’s surrounded by a number of suites and skyboxes, but it’s a crucial “confidence hole” for players before arriving at 18. With three ponds on the left and a bunker on the right fairway, the finishing hole forced 32 double-bogey or worse scores last year.

None of those, however, belonged to Dufner. Should he pull off that feat again, don’t be surprised if the fans fail to applaud. They’d just be #dufnering.

Next Page: The 5 Biggest Sports Feuds