What It Takes To Win: Crowne Plaza Invitational 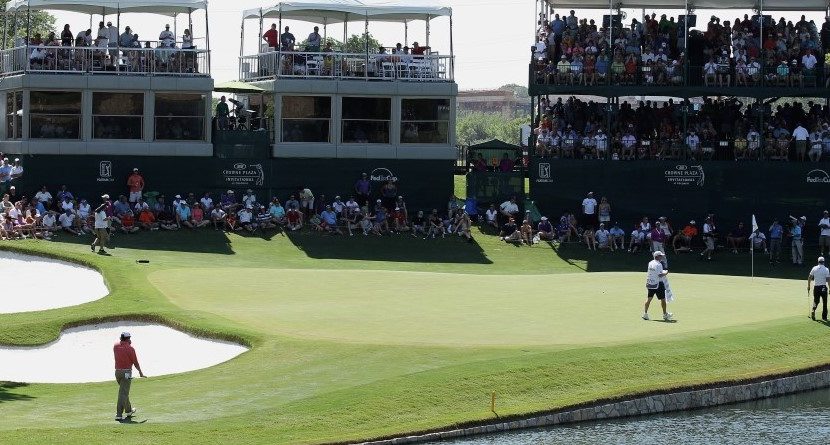 Previous Page: Sergio On Tiger – ‘I Don’t Need Him’

Zach Johnson and Jason Dufner each played three spectacular rounds of golf through Saturday at last year’s Crowne Plaza Invitational at the Colonial Country Club in Fort Worth, Texas. Not so much in the fourth round.

Johnson was merely average, sitting at even par for the day as the duo reached No. 18. Dufner was below average, as he double-bogeyed No. 9 and triple-bogeyed 15. He basically handed the tournament to Johnson.

But Johnson almost handed it back. After getting out of a bunker to within a few feet of the hole on 18, Johnson marked his ball. He then moved his marker to get it out of the path for Dufner’s putt, but he forgot to return the marker to its original spot before he putted for the win.

Thankfully for Johnson, he owned a three-shot lead at the time of the infraction, so the two-stroke penalty didn’t take away his title. Not only would he have lost more than $460,000 in earnings had he finished runner-up, he would have lost out on his second plaid jacket.

The Colonial course (par 70, 7,204 yards) has obviously been good to Johnson – four top-10 finishes in the past four years, including two titles (2010 and 2012) – but not as much to Dufner. He failed to make the cut in 2011 and he did not play in 2010, a year after finishing T59 at Colonial. Dufner just arrived in Fort Worth last year on a roll, fresh off his victory at the Byron Nelson Championship.

Holes 12-14 make up the toughest stretch on the course. The No. 12 green is swarmed by three large bunkers, which forces second shots on this par 4 to be precise. The tee shots at the 190-yard par-3 13th need to be accurate, as the ball will get wet if it’s short or right, and get buried in sand if it’s left. No. 14 is a 464-yard, par-4 dogleg left that yielded 111 bogeys last year, tied with the fifth hole for a course high.

Each of the three finishing holes rank in the lower half in difficulty, allowing the players to take chances if need be, or keep the ship steady as they close out the round. Johnson tallied only one bogey last year on the final three holes over four rounds – not counting the two-stroke penalty that nearly cost him the title, of course.