What it Takes to Win: RBC Canadian Open at Glen Abbey 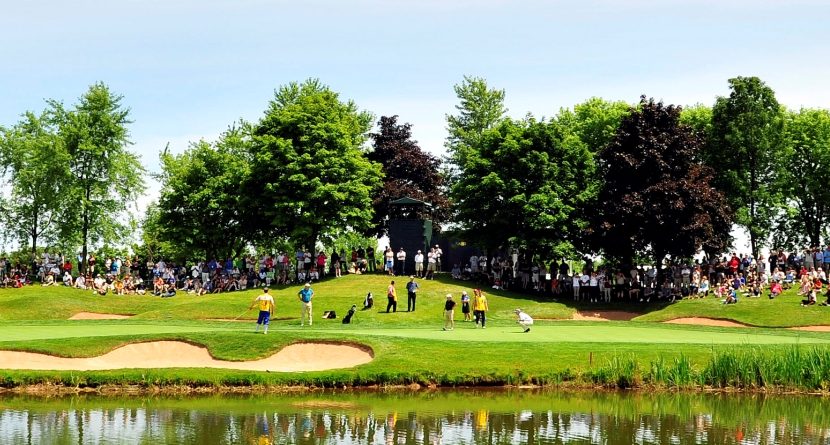 Tiger Woods won’t be at the RBC Canadian Open this weekend as the PGA Tour returns to Glen Abbey Golf Course, but the memory of his bunker shot there at No. 18 in 2000 lives on.

Holding a one-shot lead on the 72nd hole, Woods stood in a fairway bunker and saw Grant Waite, the man on his heels, stop his second shot 30 feet from the hole, meaning a near-certain birdie on the par 5. So Woods pulled out a six iron, took a deep breath, clobbered his ball out of the sand and watched it sail over some fans, over a pond, touch down some 200 yards later on the green, and stop on the fringe about 15 feet from the cup.

Woods’ chip and putt secured the championship, making Woods just the second person to win the Triple Crown trophy, awarded a golfer who wins the U.S., British and Canadian Opens in the same year. Lee Trevino in 1971 is the only other man to accomplish the feat.

That’s just one piece of history at Glen Abbey, which is arguably Canada’s most famous golf course. The Canadian Open returns this year for the first time since 2009, when the club hosted its record 25th Canadian Open and the 100th edition of Canada’s national championship.

Glen Abbey is also the headquarters of Golf Canada, the governing body for the sport in the country, and the site of the Canadian Golf Museum and Hall of Fame. It resides in Oakville, Ontario, a suburb 30 minutes southwest of Toronto, nestled up against Lake Ontario.

The course was designed by Jack Nicklaus, the first one he’d ever done on his own. For that reason, it holds special meaning to the Golden Bear.

Glen Abbey’s famed “Valley Holes” begin at No. 11, a 452-yard straightaway par 4 that is considered the course’s signature hole. Players tee off nearly 75 feet above the fairway, inviting the big hitters to swing for the green. John Daly did just that in 1994, and his shot traveled 390 yards. But it landed in Sixteen Mile Creek, which runs in front of the green. Nonetheless, a plaque was put up at the hole to commemorate “The Long Shot.”

Players exit the valley after No. 15, a 141-yard par 3 with the most-challenging green at Glen Abbey. It features two levels, so guys aim to land below the hole.

Tournaments at Glen Abbey are usually won with steady play through the “Valley Holes,” but as Woods showed in 2000, they can be won coming down the stretch as well.

Related Links: Much Has Changed Since Tiger Woods Last Won A Major

Other Hot Links:
– The 9: Proud to the Bone(s)
– Mercedes-Benz’s Golf Cart of the Future
– Open Championship Coverage