What It Takes To Win: The Barclays at Liberty National 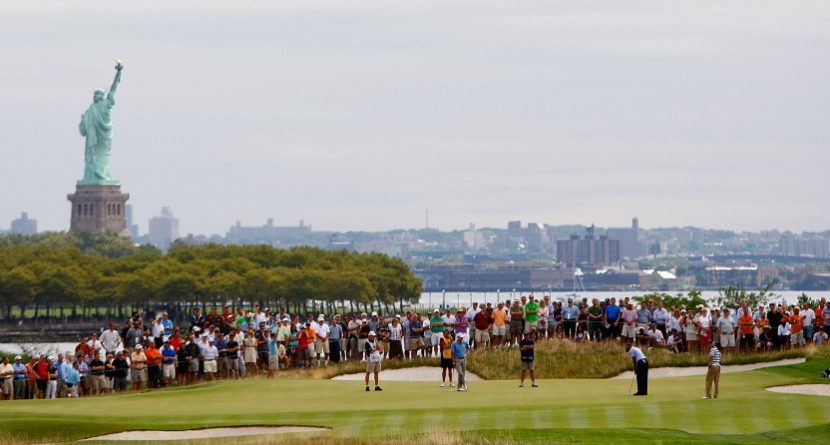 The playoffs are here. And the setting alone for this week’s tournament makes it feel more big time. The Barclays, the first of four FedEx Cup playoff events, tees off Thursday at Liberty National, complete with the Manhattan skyline as the backdrop.

The course actually sits on a former landfill in Jersey City, N.J., but an estimated $250 million went into making the property one of the finest in the country. At what other golf course can you land a helicopter, dock your yacht, and walk on cart paths made of imported Belgian stone? And where else can players arrive by ferry?

Though the land was anything but desirable prior to ’06, it’s no wonder why the location was picked. Abutting the New York Harbor, Liberty National offers grand views of the Manhattan skyline and the Upper New York Bay, with the Statue of Liberty so close you think you might be able to reach it by swimming.

The club counts former New York City Mayor Rudy Giuliani and New England Patriots owner Robert Kraft among its founding members. And the 7,353-yard, par-71 course was designed by Tom Kite and Bob Cupp, and opened in 2006 after being built by Paul B. Fireman and his son, Dan Fireman.

It has undergone some work since the Barclays last appeared at Liberty, which came in 2009, a tournament won by Heath Slocum, whose 9-under-par edged Ernie Els by a stroke. Fairways were widened, bunkers were moved, and the drainage system was upgraded; in all, 14 holes were restructured in some fashion.

Things get started with the 398-yard par-4 No. 1, featuring a creek running along the right side and cutting across right about where players will want to land their tee shots, roughly 285 yards out. Then it’s onto the first of four par 3s. The 219-yard second hole gives guys their first glance at Lady Liberty, and it also forces them to learn how to fight the ever-present wind coming off the bay.

That wind can be used to sail drives at the 395-yard par-4 third hole. Its fairway was among those widened, meaning it’s among the most inviting at which to pull out the driver. Combine the wind with the fairway’s downhill slope and some big hitters (Bubba Watson, Gary Woodland) may drive the green.

A second par 3 comes at No. 4 (193 yards) and the first par 5 arrives at No. 6 (538 yards). A pond borders the right side of the sixth fairway and green, but the putting surface can be tough to get to because it’s tucked behind that water.

No. 8 is longest hole on the course, running 611 yards. Bunkers pop up on both sides of the fairway landing area, and another handful dot the left side just short of the green.

No. 11 is longest par 3 at 250 yards. As long as their drives don’t drift into the bunker that covers the entire left side of the green, or way left into the pond, players should find birdie or par very manageable.

The last of three par 5s comes at No. 13, a 563-yard hole on which the green is reachable in two. But to do so, players will have to carry a lake – and not carry the green because a grassy hollow waits behind it. The more conservative players can just play around the lake to the right.

At No. 18, players get one of the most scenic shots on tour. The bay is off to the right, and beyond that is the picturesque skyline and Statue of Liberty. Stadium seating lines the left side of the fairway and runs behind the green. At 490 yards, the uphill par 4 is not an easy way to close out a round.

But it is memorable. In fact, much of the course is unforgettable due to its vistas: All but three of the 18 holes boast clear views of the Big Apple and Lady Liberty.

Yet, it’ll be most memorable for players who win the windy battle with the course and advance to the next round of the playoffs.