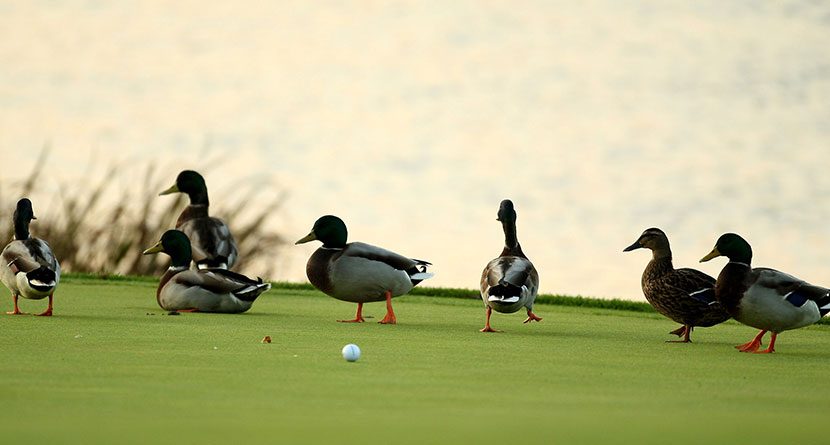 Golf is a sport played strictly outdoors, surrounded by nature and among the wildlife. On Friday, we got a taste of what it’s like when animals and golf balls come together. Here’s a hint: It’s hilarious.

During the Australian PGA Championship, Samuel Eaves had his ball lifted … but not cleaned and placed. A bird came across his ball on the course and apparently wasn’t pleased with the lie. The little thief scooped up Eaves’ ball and flew away with it.

Animal encounters with golf balls aren’t all too common, but we found some of the best on the web.

At the Puerto Rico Open earlier this year, we got a taste of what it’s like when animals and golf balls come together. Here’s a hint: It’s hilarious.

On the 16th hole in the final round, Andrew Loupe nearly had his ball snatched from the green by an iguana. The lizard failed to pick it up, but managed to flee the scene before anyone could catch him:

Animal encounters with golf balls aren’t all too common, but we found some of the best on the web.

A recent video has surfaced of an eagle finding a ball on the green, and it wasn’t happy about it being there. After a few failed attempts, the bird wrapped its talons around the ball and flew off with it.

Seagull not a fan of island green
One of the most memorable was in 1998 at the Players Championship on the island green at 17 of TPC Sawgrass. A curious seagull walked onto the green, grabbed Steve Lowery’s ball from the putting surface, and flew off with it before Lowery arrived:

Fox finds a new toy
Although it wasn’t on the PGA Tour, a group of golfers filmed a fox playing with a golf ball on the green. The fox had a great time trying to pick up the ball and hitting it with his paws, up until one of the golfers ruined his fun and grabbed the ball:

Gator costs golfer a new ball
Alligators are everywhere along the banks of Florida, so encounters with these creatures are fairly common on the golf course. This gator wasn’t a fan of being poked with a ball retriever so he decided to cause the golfer a little trouble and swam into the pond with his ball:

Hawk can’t get a handle of the ball
Once again, a bird thought it would be easier to fly away with a golf ball than it really is. This hawk had some serious trouble in this instance, eventually failing to come away with any type of souvenir:

And then there’s this thing.  Although it didn’t attack a golf ball, it did cozy up with a Scotty Cameron putter at the Portugal Masters.

Animals have always roamed golf courses for as long as we can remember, and they will continue to do so until the game becomes extinct. We just have to learn to share the course with them, or we could very well lose more than just a golf ball.  Right Chubbs?