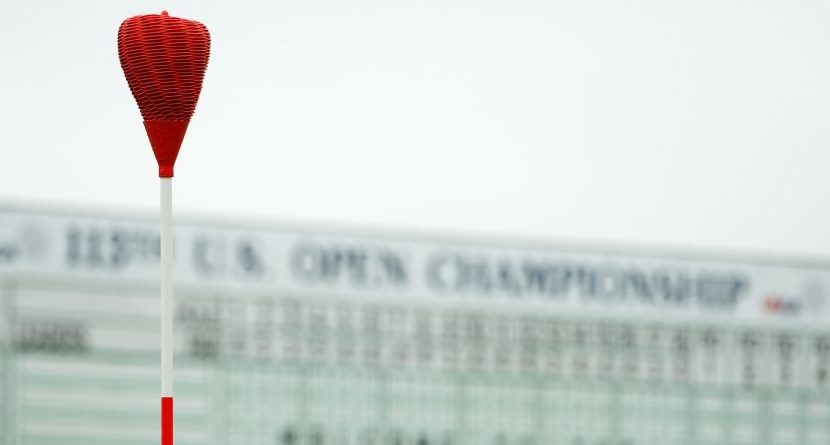 Related Link: Much Has Changed Since Tiger Woods Last Won A Major

Merion Golf Club was pounded with wind and rain Monday, and more scattered thunderstorms are expected Tuesday. Wednesday appears nice, but the wind and rain looks to return Thursday, the first day of competition at the U.S. Open.

Should it rain, scores will surely be affected. But the wind may have a larger impact – players won’t have the luxury of checking out the flagsticks to gauge the gusts. That’s because Merion doesn’t use flagsticks; the famous East course marks its holes with wicker baskets instead.

They’re just one of the features that makes Merion distinctive. And the only place many of golf’s professionals will ever see such a pin.

The baskets – which are red on the front nine and orange on the back nine – take on the shape of a balloon and are affixed to thick metal sticks standing roughly eight feet tall. So thick that they don’t sway in the wind either, forcing players to judge the wind by tossing grass into the air or studying the surrounding trees.

Why wicker baskets? History says such hole markers were common on English and Scottish courses in the 1850s, and that may have been where course designer Hugh Wilson conjured up the idea. Another story indicates that Wilson, while in England and Scotland, noticed that the staffs of sheep herders had wicker baskets at the end, and he thought that’d be a fantastic way to marks his golf course’s holes.

Yet, the Merion website credits William Flynn, Merion’s superintendent, with patenting the baskets in 1915, three years after the course opened. However, the site also says, “The wicker baskets’ origin is a mystery to this day.”

As far as U.S. Open history at Merion goes, only the 1950 event did not use the wicker baskets. According to Richard Tufts in the book “Miracle at Merion,” the USGA used standard flagsticks “simply because (wicker baskets) are different, I think there will be some criticism if the baskets are used.” That tournament featured Ben Hogan grabbing his second U.S. Open trophy in a playoff just 16 months after getting seriously injured in a car accident.

More important in this day and age of rule violations and ball drops: What happens if a player sends his ball smashing into one of the baskets? The ball is placed right on the edge of the hole and no penalty stroke is assessed. Even more reason to aim right for the basket.

Manage your way through the “wickers” well enough and you’ll get to take one home. The USGA awards a wicker basket to anyone who wins one of its events at Merion.

This week’s championship should be decided with calm skies. The forecast says wind gusts could reach 20 mph on Friday, which is about the same as Thursday. But winds on Saturday and Sunday figure to stay under 10 mph.