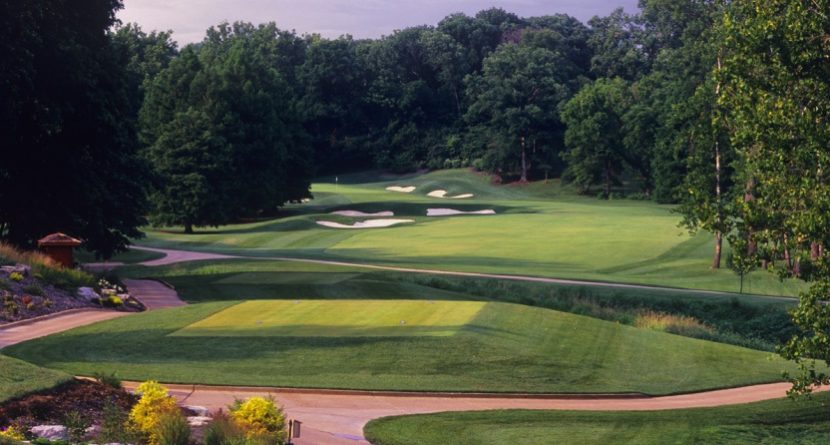 Because we enjoy making a competition out of anything, we wanted to know: Which is a better sports town – Boston or St. Louis? The two cities begin battle this week with their baseball teams in the World Series.

But that debate isn’t even worth sparking. St. Louis is a baseball town first and foremost, so much so that you probably forget it also hosts a football and hockey team. Boston, meanwhile, trots out strong support for baseball, basketball, football and hockey.

So let’s just turn it to golf: Which city has the best golf? If you’re an out-of-towner heading to a World Series game, in which city can you find better course? Here are the top three venues near-ish each stadium (sure, they may be private, but a good story can finagle your way on), followed by a verdict:

It simply calls itself “The Country Club” – it must be good. And it claims to be the oldest country club in the United States. To the rest of the world, it’s referred to as The Country Club Brookline, designating where in Massachusetts it lies; Brookline is four miles from Fenway Park. The club’s main course hosted the 1913, ’63 and ’88 U.S. Opens, as well as the 1999 Ryder Cup, and is ranked No. 24 in Golf Digest’s 2013-14 Best Courses ranking. Though it’s not technically in Boston – it is 18 miles south in Hingham – the Boston Golf Club’s course used Gil Hanse to construct its course in 2005. The man who was also tasked with creating the 2016 Rio Olympic course created a beauty that ranks No. 74 in Golf Digest’s latest rankings. Annually the site of the second round of the FedExCup playoffs with the Deutsche Bank Championships, TPC Boston (which is actually in Norton, Mass., about 45 minutes south of Fenway) is the only Massachusetts course to be featured regularly on the PGA Tour. Golf Digest put it among the “Top 10 Best New Private Clubs in the U.S.” in 2002, after it was designed by Arnold Palmer. Hanse gave it a redesign in 2007. Fifteen minutes from the stadium is the club that bears the city’s name. Its course was designed by the famed duo of Charles B. MacDonald and Seth Raynor, who worked on only one course west of the Mississippi River – this one. It opened in 1914, hosted the 1947 U.S. Open, and will put on next summer’s Curtis Cup, which is the biennial women’s amateur event pitting the U.S. against Great Britain and Ireland. Just down the road from the St. Louis C.C. is Old Warson, another project by Robert Trent Jones, the premier golf architect of the time. It opened in 1955 and hosted the 1971 Ryder Cup, the club’s most significant event. In 2010, Old Warson was named the “No. 1 Country Club in Saint Louis” by the Ladue News. Ladue is the suburb that also contains the St. Louis C.C. If you’re simply looking for the nicest courses possible to play, Boston wins. But good luck trying to play more than one of those during your quick World Series stay. You’d have a much easier time hitting up multiple fine courses in St. Louis, as the three that made our list are all within 15 minutes of each other.