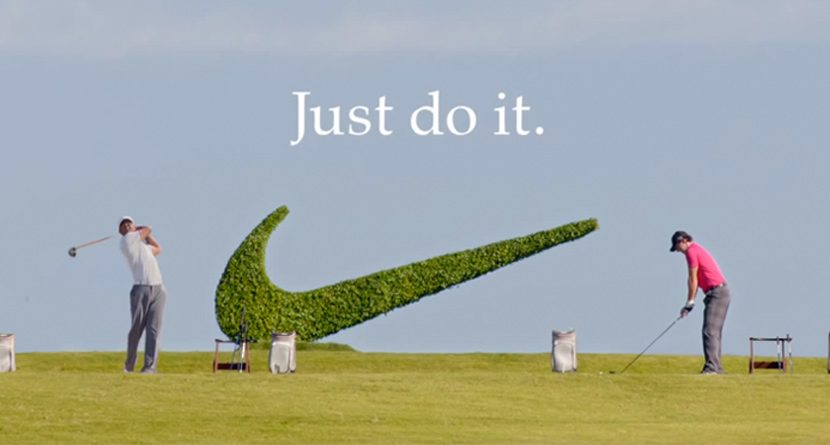 Twenty-five years ago, the advertising agency Wieden+Kennedy teamed with Nike, a quickly-growing shoe company, to come up with the most iconic slogan in sports: “Just Do It.”

To commemorate the anniversary, Nike is launching a new ad campaign called “Possibilities” on Thursday. As of this writing, the first 90-second commercial – narrated by actor Bradley Cooper and featuring LeBron James and Serena Williams – had already received more than 1.3 million views on YouTube after being posted Wednesday.

It’s yet another solid, inspiring commercial from the athletic apparel giant – which is what we’ve come to expect from Nike. The company’s produced so many great ads over the years it’s tough to list the best. But we tried. Here are 11 of our favorite Nike commercials of all time:

“No Cup Is Safe” with Tiger Woods and Rory McIlroy: The golf studs filmed this gem in January, soon after McIlroy inked a mega-deal with Nike.

“Golf’s not hard” with Tiger Woods: An oldie but a goodie. One of the first, if not the first, Tiger ads.

“It’s going to be very different” with Tiger Woods: This ad ran in 2009 after Tiger missed most of the last half of 2008 with injuries.

“Training in the pool” with Lebron James: Four different LeBrons, one funny commercial.

“Kit manager” with Cristiano Ronaldo: This one probably wasn’t widely seen in the U.S., but the Manchester United kit manager shows what Nike can do for one’s soccer skills.

“Let your game speak” with Michael Jordan: Patented moves and iconic moments from Jordan’s career are replicated by kids and teenagers.

“Rhythm of work” with Kobe Bryant, Roger Federer, Wayne Rooney and others: No words, just the sound of athletes working.

“Freestyle” with Vince Carter, Jason Williams and others: Another gem with no words, just basketballs.

“Explosive speed” with Cristiano Ronaldo and Rafael Nadal: The soccer legend plays tennis with his feet, then the tennis legend tries his feet at soccer.

“Ankle insurance” with Kobe Bryant: Kobe’s spots are usually intense. Not this one.

“Goodbye baseball, hello Cooperstown” with Ken Griffey Jr.: Honoring the legend as he enters retirement with a montage of moonshots.

Related Links: Tiger Woods and Nike – A Look Back