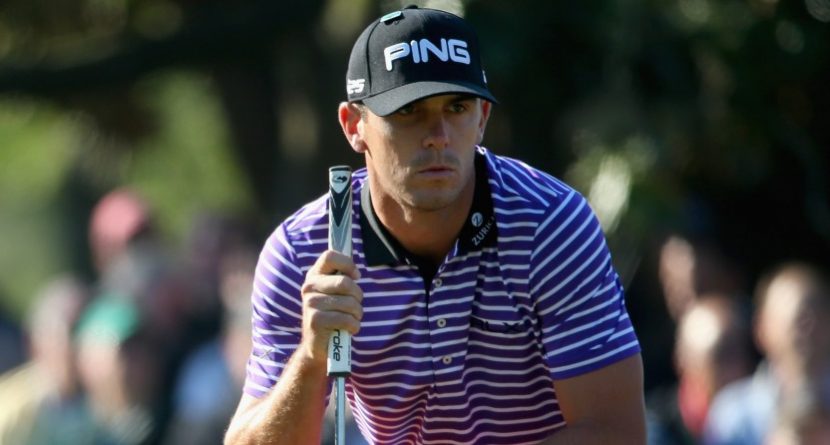 Bigger audiences in person and on TV mean more eyeballs on products, which mean more products off the shelves, which mean more dollar bills in the pockets. We always get a glimpse of what players will wear with the release of scripts, but seeing a neon green ensemble for Rickie Fowler on paper is much different than seeing that getup with green fairways and pink azaleas as the backdrop.

Here’s who wore their Thursday best for the first round of the Masters:

Rickie Fowler, PUMA: That bright greenish-yellow outfit sort of stands out, yeah? That’s familiar territory for Fowler (and PUMA) though, and he’ll be easy to spot the rest of the week. Jamie Donaldson, J.Lindeberg Golf: Green will obviously be a popular color this week, and the Welshman wore it well. Donaldson’s striped green polo isn’t as flashy as Rickie, but not as plain as Adam Scott. Bill Haas, Peter Millar: Unfortunately, first-round leaders don’t tend to fare too well in the end at the Masters, but Haas looked good while taking the early lead Thursday. He kept it simple and stylish: thin, grey stripes on a white polo, matched with light orange pants. Miguel Angel Jmenez, Lacoste: Also looking good in Haas’ group was the most interesting golfer in the world, who got Twitter all atwitter when he led the tournament early on. Turns out round-bellied 50-year-old men can pull off pink Lacoste polos. Billy Horschel, Ralph Lauren: Horschel went to the University of Florida, but he looked like a Clemson grad on Thursday with his white-striped purple polo and orange cypress pants. Still looked sharp, though.