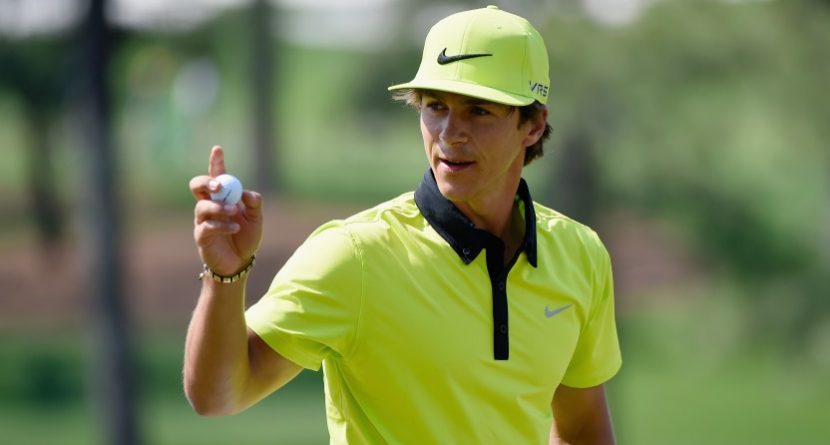 Bigger audiences in person and on TV mean more eyeballs on products, which mean more products off the shelves, which mean more dollar bills in the pockets. We always get a glimpse of what players will wear with the release of scripts, but seeing bold designs and colors on paper is much different than seeing those combinations with green fairways and pink azaleas as the backdrop.

Here’s who wore their Friday best for the second round of the Masters (even if they didn’t play their best; only Olesen made the cut):

Jason Dufner, Perry Ellis: We don’t often see the Duf Daddy don pants in colors other than white, gray or black, so as soon as he showed up Friday in bright red pants, he secured a spot on this list. They go nicely with the charcoal polo. Maybe his stylish wife dressed him today? Sergio Garcia, adidas: Rocking the magenta pants around Augusta, and blending in with those azaleas, was Garcia. His outfit Thursday was gray pants with a white polo featuring a magenta stripe on the front that grew to encompass half his back. His getup Friday was just the opposite, with magenta awesomeness on his pants and the gray stripe on his shirt. Thorbjorn Olesen, Nike: The 24-year-old Dane is part of a growing stable of Nike athletes and he’s just now starting to make more appearances on the PGA Tour. It’s not tough to look good in Nike, but we especially like the yellow, black and white combination, including the shoes. Graham DeLaet, PUMA: Spring is in the air and PUMA dropped some of those spring colors on this Canadian’s shirt and mixed it with black. Especially with the all black pants and shoes, it’s a sharp look. David Lynn, Galvin Green: The Englishman opted for the all-blue ensemble and pulled it off well with the complimentary shades. Those adizero one shoes are the perfect finishing touch.