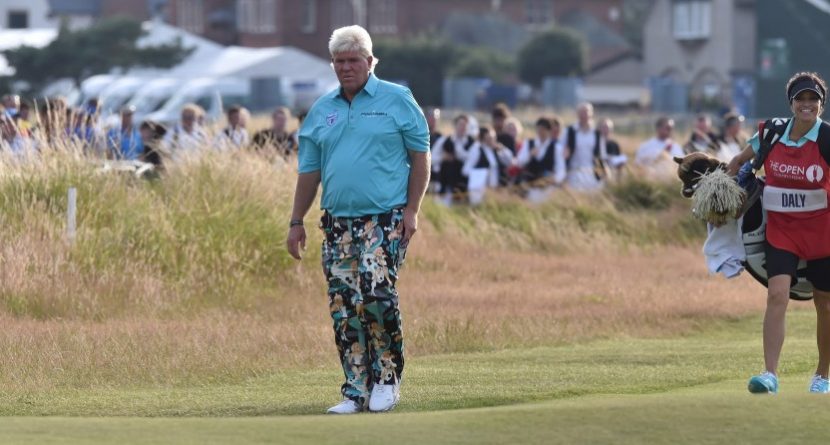 Here’s who wore their Thursday best for the first round of the Open Championship:

John Daly – Loudmouth
John Daly is in the field, so obviously he makes the list. Wednesday’s practice round featured SpongeBob. Thursday’s first round featured Galaxy Girls. All we know is if Getty photographers submitted photos of women cropped like this, they could be deemed inappropriate. But when they’re photos of John Daly, they’re deemed very appropriate: Rory McIlroy – Nike
They say when you look good you feel good, and when you feel good you play good. That may not be grammatically correct, but it describes Rory McIlroy’s day. We enjoyed his blue-and-gray ensemble, which he wore for a 6-under 66 to take the 18-hole lead. That’s Nike’s Lightweight Innovation Color polo on top of the Modern Tech pant and Lunar Control shoes. Ryo Ishikawa – Callaway
Argyle is the look that never gets old – especially in golf. Jack Nicklaus sported it in the 70s, Greg Norman in the 80s, Payne Stewart in the 90s, and it still pops up on tour today. Ryo Ishikawa rocked the argyle on Thursday: sporadic red and green diamonds on a navy blue Callaway polo. Graham DeLaet – PUMA
It certainly isn’t one of PUMA’s flashiest arrangements, but the Canadian looked sharp in the orange Golf Tech Polo with a light gray Tech Style Pant. And his caddie’s shirt looks awfully close to a hand-me-down from DeLaet. Life is good when your man is sponsored by PUMA. Padraig Harrington – Dunnes Clothing
The three-time major winner has developed his own line of performance golf apparel, and sported a snazzy purple-striped polo on Thursday with some white slacks. The clothes are carried exclusively by Dunnes Stores, the biggest private employer in Ireland, Harrington’s homeland.