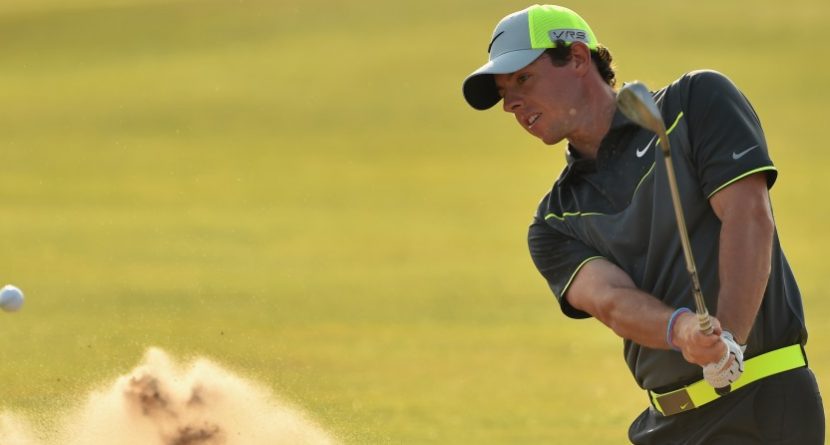 Here’s who wore their Friday best for the second round of the Open Championship:

Rory McIlroy – Nike
We said this Thursday: “They say when you look good you feel good, and when you feel good you play good. That may not be grammatically correct, but it describes Rory McIlroy’s day.” Ditto for Friday. While posting another 6-under 66 and extending his lead to four strokes, McIlroy donned a charcoal Innovation Color Block polo matched with the Modern Tech pant, Tour Mesh cap, Sleek Modern Plaque belt and Nike Lunar Control shoes. What made the look, of course, were the neon green accents. Billy Horschel – Ralph Lauren
The man who wore octopus pants at last year’s U.S. Open slipped on some snakeskin pants Friday. Ralph Lauren’s Billy Horschel wore them underneath a baby blue polo, and it’s a shame he didn’t play better (3-over 75). That way we might have seen more pics of his outfit on the photo wires. Instead, we have this single image and the sketch Ralph Lauren released before the tournament (Horschel would have been in camo on Sunday had he made the cut): Freddie Jacobson – Oscar Jacobson Clothing
Freddie Jacobson has no relation to his clothing maker, but he serves well as a brand ambassador. Freddie doesn’t always wear his pants as knickers, but when he does, he’s a lock to make “best dressed” lists such as this. We enjoyed his white hat, polo and socks that went with navy blue knickers Friday. Ian Poulter – IJP Design
The master of the plaid pants still wears them nicely. Ian Poulter donned a traditional (for him) look with a navy blue polo and plaid pants featuring blue and yellow, all from his own line of clothing. Surely he had something flashier in store for the weekend, but he won’t be playing. Matteo Manassero – Ralph Lauren
Every round these days, it seems, we see someone wearing a pink polo. The 21-year-old Italian wins that battle today. Matteo Manassero, like Horschel, wears Ralph Lauren, which provided the youngster with a pink-and-white-striped polo for his second round. It didn’t work as well as his solid blue polo from Thursday (when he shot a 67, compared to a 75 on Friday), but it looked better.