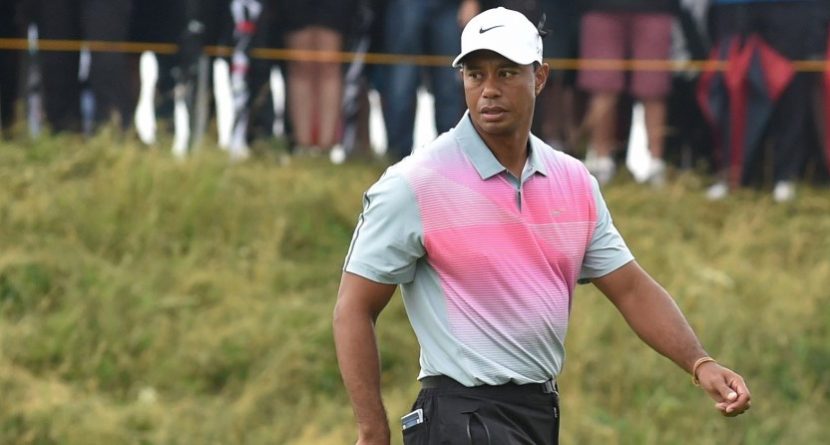 Here’s who wore their Saturday best for the third round of the Open Championship:

Tiger Woods – Nike
The pink polo award for Saturday goes to Tiger Woods, even though it wasn’t completely pink (which is fine by us). That’s a TW Seasonal Bold Stripe polo he wore, and it would have looked nice with the light gray slacks he had on underneath his rain pants. Nonetheless, he still donned matching gray TW’ 14 shoes with a pink swoosh sign. Justin Rose – Ashworth Golf
If anyone was hoping to make a splash with their pant choice for the third round, those plans were scuttled as everyone pulled on the rain slacks. Luckily, the weather didn’t call for rain jackets as well, so we enjoyed Justin Rose’s purple-on-purple Micro Stripe Cotton Pocket Golf Shirt from Ashworth. Jimmy Walker – Iliac Golf
Jimmy Walker dressed the occasion for an Open Championship with his Scottish blue plaid polo, which Iliac calls The National. OK, so they’re not playing in Scotland, but all of the United Kingdom likes it some tartan. Rickie Fowler – PUMA
While Rickie Fowler was battling Rory McIlroy atop the leaderboard, he certainly wasn’t wearing one of his flashiest getups. But Fowler doesn’t need to be flashy to be stylish. His Jaquard Pattern polo with a darker purple collar looked sharp, even if he missed a chance to match it with some purple-accented PUMA Biofusion shoes.