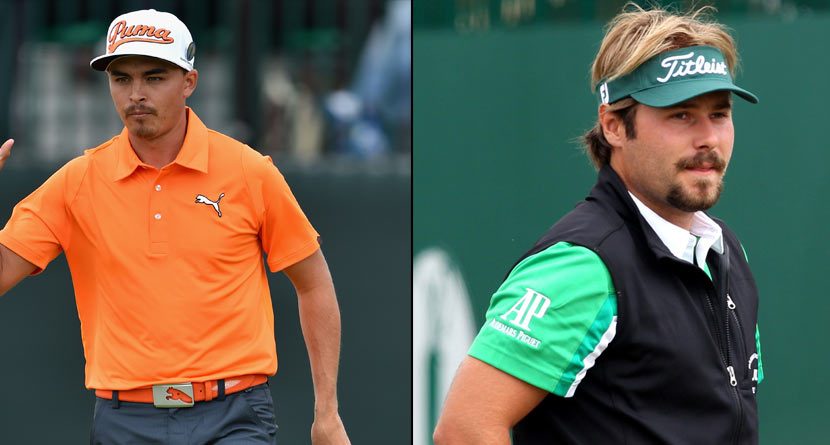 Here’s who wore their Sunday best for the final round of the Open Championship:

Victor Dubuisson – J. Lindeberg
Victor Dubuisson not only picked up his best career finish in a major on Sunday (T-10), he was also the class of the field in the wardrobe department. Dubuisson’s J. Lindberg apparel stood out amongst the crowd at Royal Liverpool all week, but especially on Sunday thanks to the mint green/white/black ensemble he sported. Rickie Fowler – PUMA
Normally, we see Rickie Fowler covered head-to-toe in Sooner Orange on Sunday, but that was not the case at the Open Championship. Fowler still represented his alma mater with his trademark orange shirt and belt, but opted for the more professional looking dark gray trousers, toning down his usually loud outfit. Robert Karlsson – Ashworth
While Robert Karlsson’s great finish (T-13) at The Open may have been a bit of surprise, his sharp looking wardrobe choice shouldn’t be. Maybe it doesn’t have the same notoriety as Fowler’s orange and Tiger Woods’ victory red, but Karlsson has been sporting the same combo of black shirt with blue stripes and blue pants his last few Sunday rounds. It seems like it’s working. Sergio Garcia – adidas
The last time the Open Championship was held at Royal Liverpool, Sergio Garcia led after 54 holes and came out in a canary-yellow outfit that left many thinking … “what was he thinking?” This Sunday in Hoylake, Garcia was again in contention. However, he chose a very smart, more conservative outfit. His teal blue shirt and belt with black pants made sure he stood out this week for all the right reasons. Marc Leishman – Ben Hogan
Despite having only one victory in his PGA Tour career, Marc Leishman has played pretty well in majors when he’s made the cut. At Royal Liverpool, Leishman stood out for more than just his great play. Decked out in a polo featuring stripes of alternating shades of blue, his Ben Hogan performance gear made Leishman one of The Open’s best dressed on Sunday.