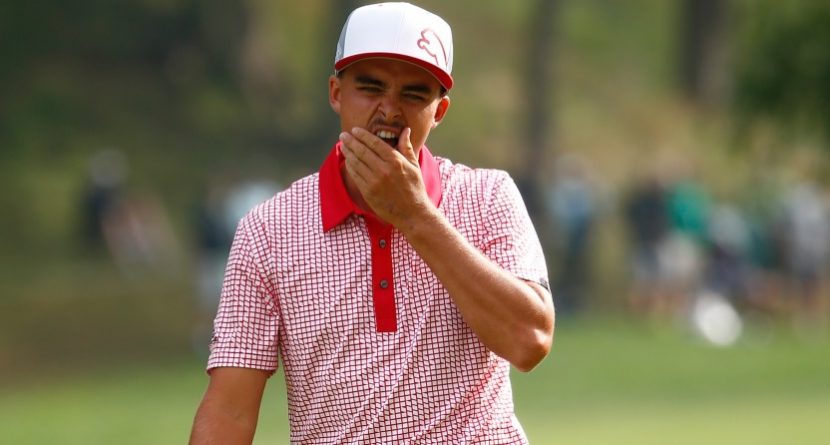 Here’s who wore their Friday best for the second round of the PGA Championship at Valhalla:

Rickie Fowler, PUMA
Fowler doesn’t need the bright and flashy threads to look sharp. He looked good and played well (5-under on the day) in the Pattern Print Polo highlighted by the solid red collar and matched with the red flatbill on his cap. Billy Horschel, Ralph Lauren
We were really hoping for more images of Horschel from today because we knew the rainbow plaid pants were coming. Just trust us when we say they looked phenomenal on TV. Here’s a quick look:

But he made it to the weekend, which means we get to see camo frog pants on Sunday, and really, that’s all we were hoping for. Horschel, the man who sported octopus pants last year, was slated to don snakeskin pants on Sunday of the Open Championship, but sadly, he missed the cut. Please be at the ready on Sunday, photographers. Ian Poulter, IJP Design
The Englishman was hopeful by slipping on the Eagle Golf Shirt from his line of clothing, but he recorded no such scores. That snazzy purple and teal polo helped Poulter to three birdies, three bogeys and a double for a 2-over 73, five shots worse than his first round. Gary Woodland, Under Armour
Under Armour is relatively new to the golf space, but we’ve enjoyed what we’ve seen so far out of the company. Woodland wore a light orange polo with gray stripes on top of a sharp navy blue belt and trousers.