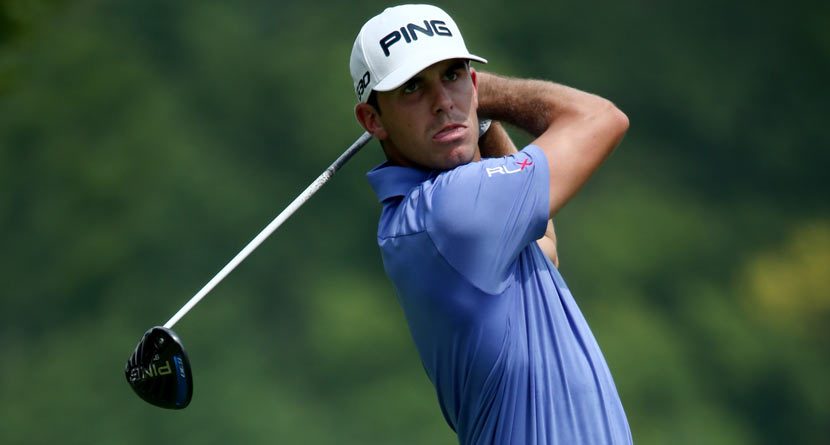 Here’s who wore their Sunday best for the fourth round of the PGA Championship at Valhalla:

Billy Horschel, Ralph Lauren Polo RLX
Coming into the PGA Championship, Billy Horschel’s fashion reputation preceded him. From the moment his scripts were released, folks were clamoring for his “camo frog pants.” Unlike Horschel’s final round, they didn’t disappoint. The man — and brand, Polo RLX — who brought us octopus and snakeskin pants has another hit on his hands … er, legs. These things are badass. While there’s no disputing that John Daly is King of the Crazy Pants, Horschel could be gunning for his throne. Henrik Stenson, Hugo BOSS
Dressed all in black, a la Gary Player, Henrik Stenson made a big move on Sunday at Valhalla. His Hugo BOSS outfit, much like Tiger Woods’ famous “Victory Red” get-up, could’ve been a little intimidating for his competitors. Think about it: Gary Player? Dale Earnhardt? Johnny Cash? Will Smith and Tommy Lee Jones? The guy in black always means business. Jonas Blixt, PUMA
We’ve seen Jonas Blixt pull off some pretty loud outfits in the past, but this Sunday the Swede toned it down a little bit. Wearing a plain teal-green shirt with all black accents, Blixt was easily one of the best dressed during the final round. Blixt’s ensemble still had some character, but was a far more classy look than the bright oranges and blues he’s known for. Brendan Steele – Dunning Golf
Brendan Steele may not have finished the PGA Championship where he would’ve liked, but he certainly looked good doing it thanks to his apparel from Dunning Golf. Sporting black, red and gray stripes on Sunday, Steele’s outfit was simple — but very stylish. Danny Willett, Callaway
Young Englishman Danny Willett played some really solid golf this week at Valhalla, but that was overshadowed by his style. Pairing white pants and white accents with a navy blue polo with navy, royal, red, orange, peach and white stripes, Willett impressed with more than just his golf game.