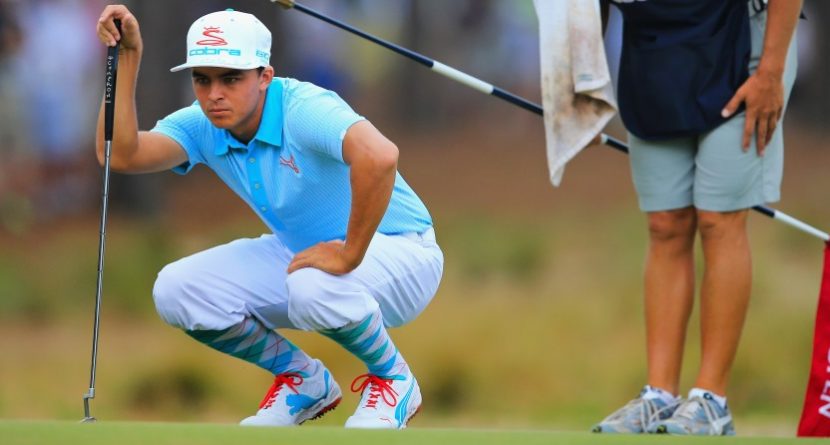 Here’s who wore their Thursday best for the first round of the U.S. Open:

Rickie Fowler – PUMA
The no-brainer choice to top this list for Day 1, Rickie Fowler ditched the orange pants that were laid out in his pre-tournament script for some white knickers in honor of the late Payne Stewart. The argyle socks obviously made the look, but his scuba blue PUMA pattern polo shirt and red/white/blue Biofusion shoes were quite nice as well. Gary Woodland – Under Armour
You’re forgiven if you couldn’t quite track Gary Woodland’s tee shot on the par-3 17th, which he came within inches of acing. That’s because it looked like the man who hit the ball was glowing. You definitely couldn’t miss Woodland in his hot pink Under Armour performance polo, which was paired with all white UA pants and shoes. D.A. Points – Grand Slam
We’re fond of the navy blue polo with purple stripes sported by D.A. Points on Thursday, a shirt made by Grand Slam. What we really enjoyed, though, was the Lego belt buckle. Sure, we’ve seen it on Points before, but it just goes to show that even when stepping up the clothing game for majors, you can’t forget about the good-luck charms. Lego isn’t even a sponsor of Points’, but needs to be.