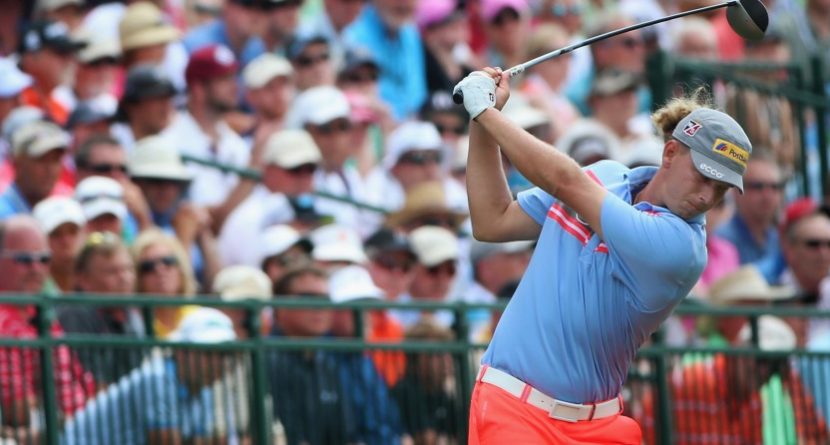 Here’s who wore their Friday best for the second round of the U.S. Open:

Marcel Siem – Brax Golf
On Thursday, it looked a bit like Gary Woodland was glowing in his hot pink polo. On Friday, it was Marcel Siem’s lower half. The 33-year-old German sported some hot pink pants, topped by a baby blue Brax Golf polo accented with pink and white stripes across the chest. Just imagine if Siem had worn those trousers Thursday, when he too donned a hot pink polo. Luke Guthrie – Hugo Boss
It’s not uncommon to see players don red, white and blue for the United States Open, but few ever wear the American flag. Guthrie did so Friday on the back of his Hugo Boss polo shirt, which is called the “Paddy Flag.” We’ve definitely seen worse American pride gestures. Justin Rose – Ashworth
The defending U.S. Open champ looked sharp Thursday with his limited-edition Ashworth Majors Collection polo, but we were fonder of Ashworth’s Performance Engineer Chest Stripe shirt on Friday. What really made the look were the dark red stretch trousers running down to the light grey adicross gripmore kicks. Jordan Spieth – Under Armour
The 20-year-old doesn’t get too crazy with his getup, and simple shouldn’t be ignored. Spieth sports UA head to toe, and looked great Friday with a light orange Elevated Heather Stripe Polo and navy blue Bent Grass pants. And as usual, he’s wearing the first style of golf shoes UA has ever made. They’re not even available to the public yet, only to Spieth and Gary Woodland.