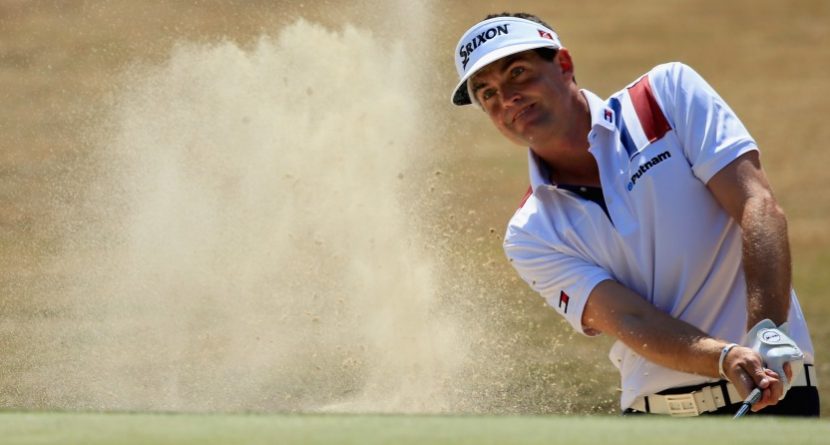 Here’s who wore their Saturday best for the third round of the U.S. Open:

Keegan Bradley – Tommy Hilfiger/Jordan Brand
Saturday was Keegan Bradley’s day to sport the American pride. Well, he busted out some red, white and blue Jordans on Thursday, but for round three he wore only red, white and blue. His white Tommy Hilfiger polo featured red and blue stripes starting on his left shoulder and running down his back, into the navy blue slacks. To top off the look, Bradley brought out the solid red Jordan shoes. Rickie Fowler – PUMA
Rickie Fowler must have felt good Saturday, because he played good (-3 on the day), and he looked good. Not that his style is much of a surprise; he’s regularly one of the best-dressed guys on tour. He, of course, made this list for his Payne Stewart-inspired knickers on Thursday, and he’s back with his pool green and scuba blue Road Map Stripe polo, matched nicely with the pool green fitted belt. Hideki Matsuyama – Dunlop Sports
Not much is known about the 22-year-old’s clothing maker, but Hideki Matsuyama wears gear from Dunlop Sports, which owns Cleveland Golf/Srixon, which makes Matsuyama’s clubs and balls. His Saturday look included a white performance polo topped by a yellow chest stripe and blue shoulders. Our favorite part of the getup is the light yellow slacks. Brandt Snedeker – Peter Millar
If it weren’t for the Bridgestone cap and adidas shoes, we’d have thought that was Ian Poulter out there rocking the plaid pants. Instead, it was Brandt Snedeker in a look that’s apparently only for majors; he also wore plaid at the Masters, but not often otherwise. The spectrum blue trousers come courtesy of Peter Millar and feature hints of pink and light green.