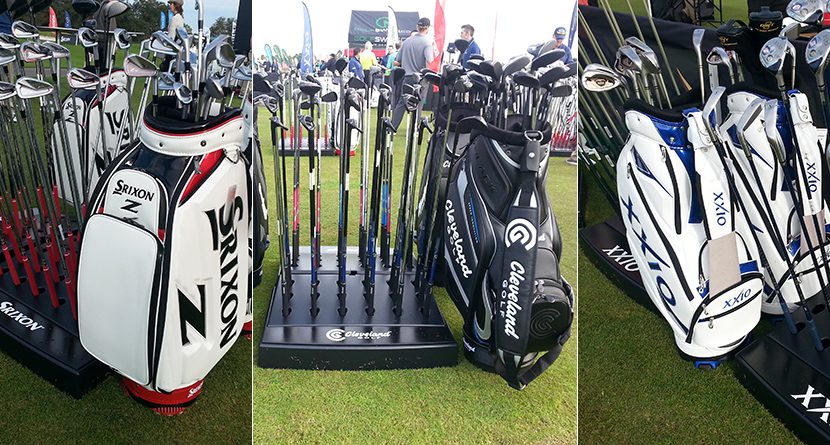 A walk around the range at Orange County National for the PGA Show Demo Day would elicit numerous emotions, “oohs,” and “aahs.”

No matter the manufacturer, though, there’s no doubt that everyone across the golf industry put their best foot forward on Day 1 of the annual merchandise show.

One brand that undoubtedly made its presence known was Cleveland/Srixon Golf. With a solid mix of product, display and added flair, what will be in 2015 for the brand was stated very clearly.

New at the show are the CG Black Custom Driver and CG Black CB irons, which Cleveland is using to appeal to a wide variety of golfers. Also new from Cleveland, although not available until the spring, will be the CG TFI Smart Square putter. While the new products were key to Cleveland/Srixon’s impressive showing at demo day, there was plenty of focus on products that have already been released to the public from Srixon and sister brand XXIO.

For Srixon, it’s all about the Z Series, which features 745 and 545 models geared towards a wide variety of players. The Z 745 irons carry a muscleback design, thin top line and really fit the eye and feel of a good player. The 745s are a bit more forgiving and are cavity back for an added boost. XXIO is another interesting piece to the Cleveland/Srixon puzzle. With stellar market share in Japan, XXIO has been brought to the U.S. and appeals to those seeking premium materials at a premium price point. The XXIO line features a driver that retails between $600 and $800, irons that touch the $1,500 mark and premium balls that cost $80 — $80! — for a dozen.