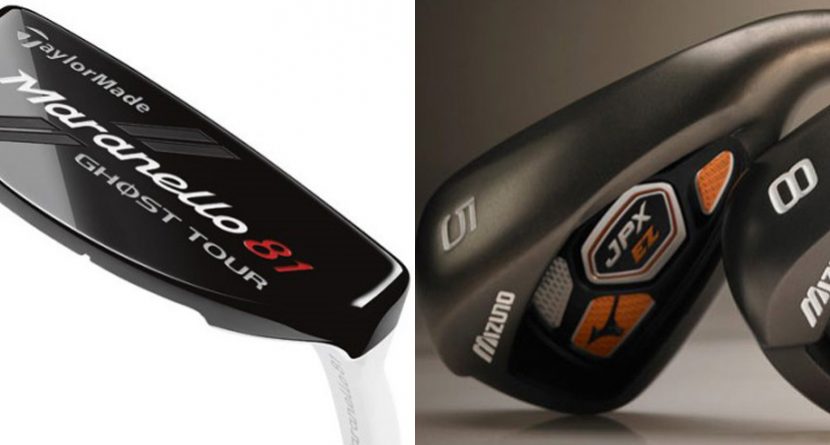 While the golf season may be winding down for many people across the country, the new PGA Tour is already underway. With the new season comes new golf equipment in the hands of your favorite touring pros. Here is a list of 10 new clubs you can expect to see in golf bags very soon.

Callaway Big Bertha Drivers – As reported on the Back9Network earlier this month, Callaway Golf has released a brand new generation of Big Bertha drivers. Set to hit the market in February 2014, the Big Bertha will come in two different styles – including an Alpha version for fancy people – and promise a new look, feel and performance level the likes of which you’ve never seen.

Cleveland Smart Square Putter – I recently reviewed this new putter and am still impressed by how easy it is to line up putts with the Smart Square. Cleveland’s new putter – which comes out in November – will definitely be a game changer for professionals and amateurs alike throughout 2014.

Nike Covert 2.0 – While there is no confirmed release date for the sequel to last season’s Nike Covert driver, a number of sites have already spotted a prototype on driving ranges. Expect this updated version to be incredibly easy to hit and promote huge distance numbers.

TaylorMade Ghost Putters – Touring pros have been using the white Ghost Putters from TaylorMade for months now, but the golf equipment powerhouse is sure to release a number of new styles for the 2014 season. I’ve been playing the Maranello 81 series in my bag for about a month now and can safely say it is one of the best putters I’ve ever used.

Nike Method Putters – Similarly, Nike’s flagship putter line will get a big update in 2014 with a number of “Mod” styles, or “modern classic.” We’re talking blade putters, heel-shafted putter heads and many more classic styles that are sure to be abuzz at country clubs worldwide.

Adams IDEA Hybrid Irons – Game improvement clubs have been popular with amateur golfers for years, and there are few companies that do it better than Adams Golf. Their IDEA Hybrid Irons will not only help you get the ball airborne, but they could help you shoot your best score ever next year.

Mizuno JPX-EZ Irons – Mizuno is typically known to offer irons for the low-handicap player, but they have recently ventured deep into the game improvement market. Their new JPX-EZ irons might be the best non-hybrid irons money can buy. Keep an eye out for these suckers in golf bags everywhere very soon.

Callaway Apex Irons – Available on Dec. 6, Callaway’s new Apex irons are sure to change the way we all look at forged clubs. Not only are these clubs the prettiest things you’ll see on a course (other than the beer-cart girl), you’ll be amazed at how easy they are to hit for a club geared towards better players.

Nicklaus Golf Balls – I know, I know – these aren’t golf clubs. But when the Golden Bear releases a new line of golf balls for three tiers of players, how can we not mention them here? I fully expect to try out these golf balls soon along with a legion of loyal Jack Nicklaus fans.

TaylorMade SpeedBlade Irons – TaylorMade continues to raise the bar with its distance-focused irons, including the new SpeedBlades. What I like most about these models is that both Tour players and weekend hackers can benefit from the technology.