A Look at Open Championship Fashion Through the Years 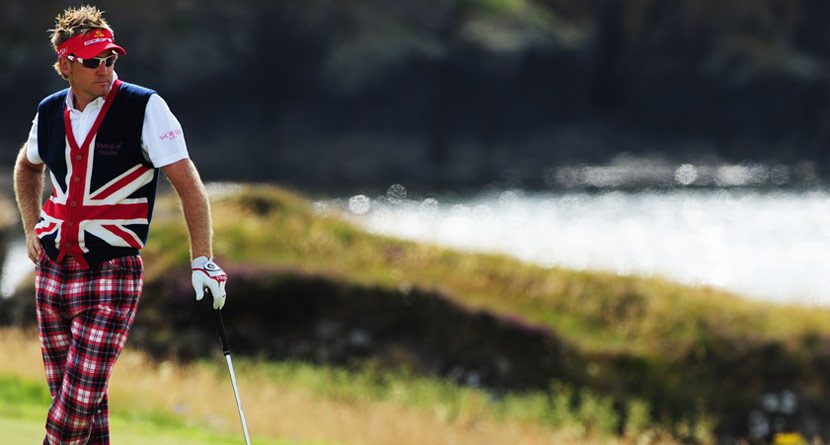 The Open is golf’s mid-summer classic. Throughout its history an eclectic mix of golf style has come to the fore, not surprisingly lead by a rather healthy collection of jumpers, also known as sweaters for those not yet in the spirit of The Open.

Here’s a look back at some of The Open’s best fashion highlights. Over a five-year period from 1987 to 1992, England’s Nick Faldo won five major championships, including three claret jugs, making this jumper featuring an 8-bit graphic golfer from Pringle famous at both the 1990 Open and Masters, emerging victorious from both events. “Gentlemen are requested to attend in dinner attire” is what the invitation to a past Open champions event may have read. For John Daly, a blazer selection from his clothier of choice, Loudmouth Golf, was outlandishly out of place yet wonderfully appropriate. Iconic looks become iconic due to the circumstance under which they are worn. Such is the case for this 100 percent argyle patterned merino beauty worn to victory by Jack Nicklaus at the 1978 Open. The savvy collector may have scooped a replica of this sweater when Nicklaus Sportswear included it in a commemorative collection. Not many men exuded more style and panache on the golf course than Seve Ballesteros. Whether it be his second-place tie at the 1976 Open at age 19, or his win from the car park at Royal Lytham & St. Annes in 1979, when you put Ballesteros and The Open in the same sentence, thoughts of that Slazenger jumper come to mind. Swede Per-Ulrik Johannson spent his first 10 years as a professional on the European Tour, and for North Americans, our only glimpse of professionals outside the PGA Tour came during The Open. In 1995, Johannson briefly contended at St. Andrews, but left his mark when he created a minor fashion sensation with his signature poor boy cap. Speaking of caps and Swedes, the more accomplished Jesper Parnevik could be easily spotted from distance at The Open thanks to a turned up cap brim. With no less than five top-10 results at The Open, Parnevik’s personal affectation resulted his desire to allow the sun on his face. Somehow this unique look did not trend among fellow players or fans, though he was long known as the leading man of style on tour before injury slowed his career. Known as the “Peacock of the Fairways” for his flamboyant style on the links and as the player Dan Jenkins modeled the lead character after in “Dead Solid Perfect,” Doug Sanders tied for second in 1966. But then in 1970 he he took four shots to get up and down from 74 yards, including a gut-wrenching two-and-a-half-foot miss, dressed from head-to-toe in purplish hue. Sanders lost the subsequent 18-hole playoff to Jack Nicklaus. Before he founded IJP Design, Ian Poulter shocked the golf world and offended more than a few of his compatriots when, in the 2004 Open Championship, he sported trousers in the pattern of the Union Jack. Judging by the cap, it looks like he shared style sensibilities with one Per-Ulrik as well.