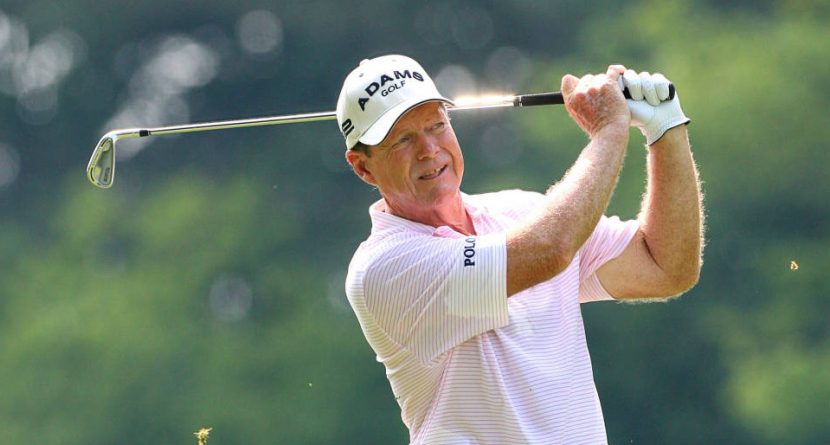 Weathered it had become through time but the hand-written message in black paint never left any grey area. Golfers playing the Titusville, Fla., course were given a not-so-subtle hint (a) who Bertha’s son is and (b) what brand of driver they should be playing – in no uncertain terms.

Today the sign is a fond memory for Adams Golf’s founder and former CEO Barney Adams (who still has his late mom’s handiwork on a wall in his home) but also a cool piece of product validation memorabilia Adams’ new parent company inherits.

TaylorMade-adidas Golf (TMaG) purchased Adams Golf for $70 million cash on March 19 last year, making the Carlsbad, Calif., company and its new Plano, Texas, subsidiary a formidable tag team. By acquiring one of its fiercest rivals, TMaG further distanced itself from competitors as the wood category’s runaway leader on Tour. Adams has been entrenched as the No. 1 hybrid brand for the past five years on the combined PGA, Champions and Web.com Tours.

From a consumer-sales perspective, TMaG enjoys the prospects of a much broader demographic profile. Adams’ long-time commitment to the game-improvement category extends TMaG’s traction into areas it is not traditionally noted for exceling.

“We talk about the voice of our company being directed to the 0-4 handicap player,” said TaylorMade CEO Mark King last March. “Sure we sell to higher handicaps but our focus is the top of the pyramid. Adams Golf is positioned for game improvement. We think the combination of TMaG and Adams allows us to compete in all segments of the marketplace.”

How about on Adams side of the ledger? Perhaps hard to quantify right now but positive in prospect are two pivotal benefits under the TMaG umbrella. The monetary stability TMaG enjoys immediately shores up Adams’ financial future while allowing the brand significant growth opportunities outside North America. Asia has already been targeted as a primary destination for Adams product.

Synergies between the two brand’s R&D departments are already in play. Adams Golf’s recently unveiled Speedline Super S and Super LS woods continue to highlight Velocity Slot Technology (VST) and both lines are distinguished by white crowns (as you would expect). There is a caveat. Adams by design will employ a slightly more muted white matte finish to keep it distinct from TaylorMade products.

The Super S line-up has its own unique distinction. The new line marks the first time Adams has launched an entire family of products – driver, fairway woods, hybrids and irons – under a single name.

“We felt it was important,” said Tim Reed, VP of R&D for Adams Golf, “to give the whole line a common name since they all share many of the same technologies.”

Also important to the big picture for the combined forces of TMaG and Adams Golf is keeping both brands distinctive in the marketplace. While the white wood finishes provide a glimpse of synergies, one of Adams president John Ward’s key platforms is to position and keep Adams very separate from the parent company.

“It’s extremely important Adams maintains its identity with our customers and consumers,” Ward said. “Obviously we’ll work co-operatively (with TaylorMade) but Adams has built an outstanding industry reputation we’ll continue to build on.”

“We feel the best chance for the continued growth of Adams is to leave it in Plano and operate it as an affiliate to our business,” King said. “We’ve had other acquisitions the past 10 years where we’ve had full integration. Frankly, we’ve struggled with those acquisitions to allow them to remain with an identity and ability to compete in the marketplace. So we believe leaving Adams as an affiliate gives them the best chance for growth.”