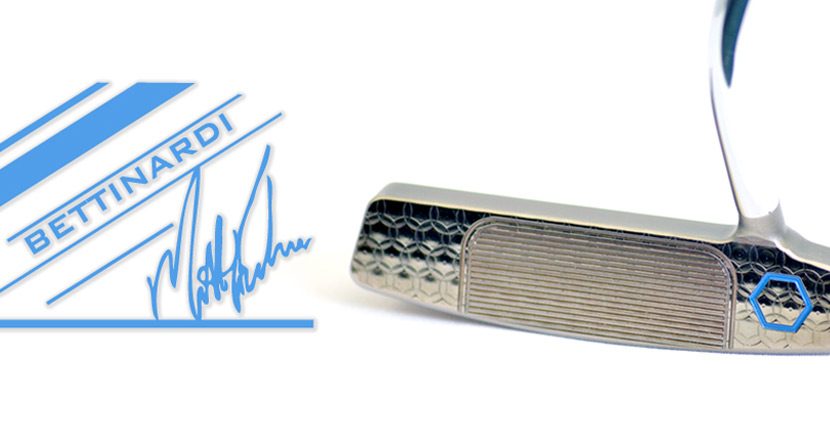 The good folks at Bettinardi Golf are pleased to announce the unveiling of their new Kuchar Model putter series, inspired by PGA Tour superstar Matt Kuchar.

By now every golf fan is aware of the proposed anchored putting stroke ban that will go into effect on Tour in 2016. However, Matt Kuchar has long since used a unique putting style that secures the grip of his putter to his forearm as opposed to anchoring it to his torso. The result is a true, consistent putting stroke that has guided Kuchar to two tournament victories this season. Bettinardi’s new Kuchar Model series introduces the forearm-lock putting style to golfers like you and me. The two main putter styles – the Kuchar Model 1 and 2, respectively – are available in either standard length or “arm lock” style, which is slightly shorter than a typical belly-putter. Each putter features Bettinardi’s patented Feel Impact Technology (F.I.T.) face, which promotes a soft feeling at impact with your golf ball.

The Kuchar Model 1 design is a replica of what Kuchar used to win the 2013 WGC World Match Play and Memorial Tournaments earlier this season. The beautiful heel-toe style putter provides a confident appearance at address while Bettinardi’s precision-milled putter technology maximizes the club’s sweet spot.

Similarly, the Kuchar Model 2 style features a traditional mallet design and perimeter weighting that promotes a smooth, consistent putting stroke. As a fan of heavier putters, this style would be right up my alley.

To learn more about the Kuchar Model putter series and all Bettinardi designs, visit their company website at www.bettinardi.com.