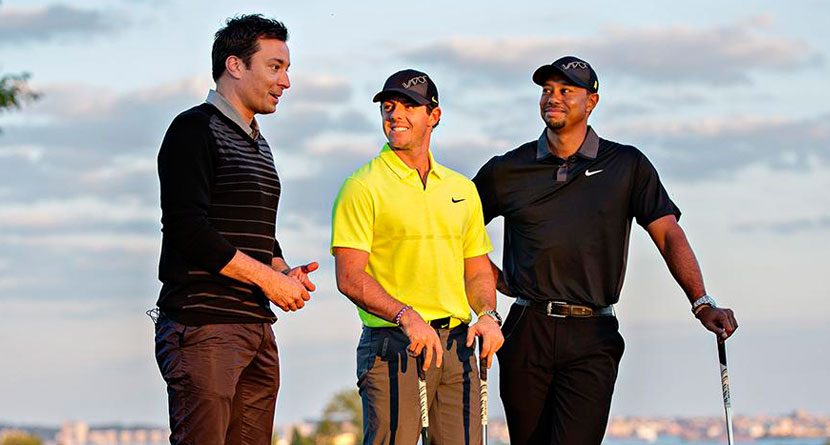 By now, just about every golf fan knows Jimmy Fallon hosted Tiger Woods and Rory McIlroy on “The Tonight Show” Monday. But what some may not know is that Woods and McIlroy hosted Fallon for their own event afterwards.

The trio was at Liberty National Golf Course to launch Nike’s newest line of irons, the Vapor series, and Fallon may or may not have given the two some golf tips.

OK, let’s be real. Fallon wasn’t giving Woods or McIlroy any tips on their swings. In fact, it was likely the other way around. And that’s only if you’d call McIlroy saying “I just haven’t seen a shot that bad in a while” to Fallon constructive criticism.

Here’s how the three looked on the picturesque range at Liberty National:

Why would Nike bring along Fallon to launch a new line of irons? Well, because everything is better with Jimmy Fallon … and the video proves it.

As for the irons, the Nike Vapor family feature three different models: the Vapor Pro, Vapor Pro Combo, and the Vapor Speed. Craftsmen from Nike were assisted by Woods himself in the design process, because who wouldn’t want clubs designed by a 14-time major champion?

“We had this idea, if we moved the CG (center of gravity) towards the center of the face that it would have more impact and more mass right behind the golf ball. And it worked. I was able to hit the ball a little bit further, it came off more solid, and the amazing thing is the ball flew better,” Woods said on Nike’s website.

Here’s a preview of what to expect when they launch on Oct. 31: They look like some of the best irons ever created by Nike, and they’ll be available for pre-order on Oct. 1.

Unlike the MM Proto release, these should be available in much larger quantities.