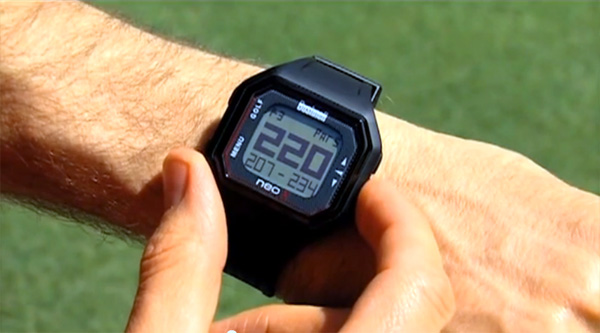 When it comes to golf GPS devices, golfers have a wide range of options from which to choose. Smartphone apps, handheld devices and other gadgets can make choosing the right rangefinder difficult. Thankfully, Bushnell’s new Neo X GPS Watch solves that issue in one convenient package. I had the opportunity to test out the Neo X GPS Watch on the course this holiday week. I was initially surprised at how lightweight the device is while on my wrist, which I saw as a huge positive since it did not interfere with my golf swing. I was also shocked at how long the battery lasted from one charge to the next (Bushnell’s website suggests one charge is good for over 3 rounds of golf).

What was most impressive about the watch was its GPS accuracy. I’ve tried many different rangefinders in my life and most have been moderately accurate, at best. The Neo X GPS Watch, however, might be the most accurate device I have ever tested. Plus, there’s nothing more convenient than having your rangefinder on your wrist at all times. Brilliant idea.

The one minor “con” I have for the Neo X is its bulky watch face. I have smaller wrists, so while the weight of the watch was minimal, the large face made it difficult to bend my wrist back at times. However, I should stress this is a very minimal concern.

The Bushnell NEO X GPS Watch retails for $199.99 and can be found at most major golf retailers.