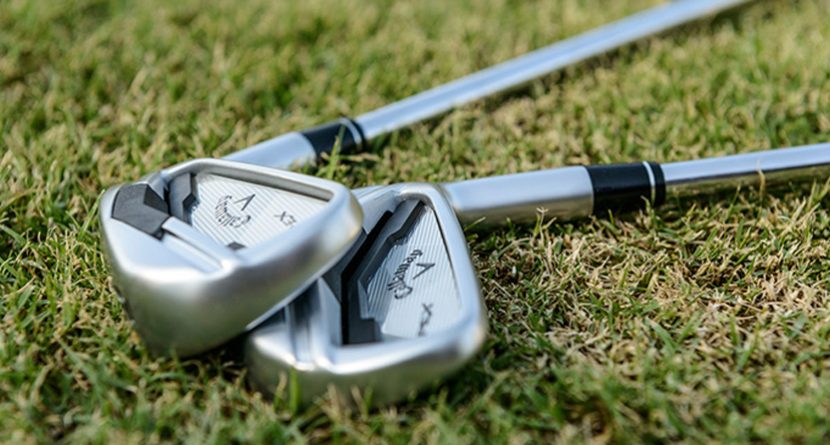 More evidence that Callaway is after the category of player, which could be referred to as “purists looking for a competitive edge,” comes this fall in the form of the new Apex forged irons.

Golf equipment buffs of a certain age will recognize the name Apex from the Ben Hogan Company – it was the brand of Hogan’s player’s iron as well as a shaft that True Temper specially designed for Hogan. (Callaway kept the Apex trademark when it sold the Ben Hogan Company.)

Beyond the nostalgia, and the low glare satin finish preferred by top players, the new Apex irons bring a number of distance characteristics into the forged category – the deep undercut cavity and larger blade size being just two of them.

The 3-5 irons are designed with tungsten inserts in the sole to provide higher launch (yes, you can get a 3 iron, but a typical set make up will likely be 4-A) and all of the irons are actually composed of two main materials, not including the tungsten. The body is made of 1020 carbon steel, while the thin Carpenter 455 steel face insert is the same one used in Callaway’s X Hot fairways. Callaway claims that each one of the irons is precision machined for 40 minutes, and who am I to argue – the quality is clearly there.

I spoke to Callaway’s Director of Marketing for woods and irons, Jason Finley, who told me about the new direction that Callaway is forging (excuse the pun) with the Apex irons.

“A lot of better players grew up playing forged irons,” he told me. “Bringing this much forgiveness and distance into a forged iron is really exciting.”

Many naysayers claim that the distance aspect of “distance irons” is nothing more than reduced lofts and longer, lighter shafts. Finley told me that while the Apex irons are in fact 3 degrees stronger, they launch at a higher angle than a typical club of the same “number” with a higher peak apex and more spin. (And let’s not forget about that forged feel.) As for the overall look of these irons, I can best sum it up by saying that no single feature dominates. They are slightly offset, and the size and top line are certainly bigger and thicker than the typical small blade.

The overall weight with the standard True Temper XP-95 shafts was a bit lighter than what I was used to – for me that meant adjusting my timing a bit. Once I smoothed things out, it seemed like I could get excellent launch and distance without working so hard, and I found the turf interaction, especially from the rough, to be excellent. Since many mid-ams and senior players are still playing heavier shafts, the Apex irons would be the perfect way to see how a lightweight steel (or graphite for that matter) shaft can perform in an iron that was designed around it.