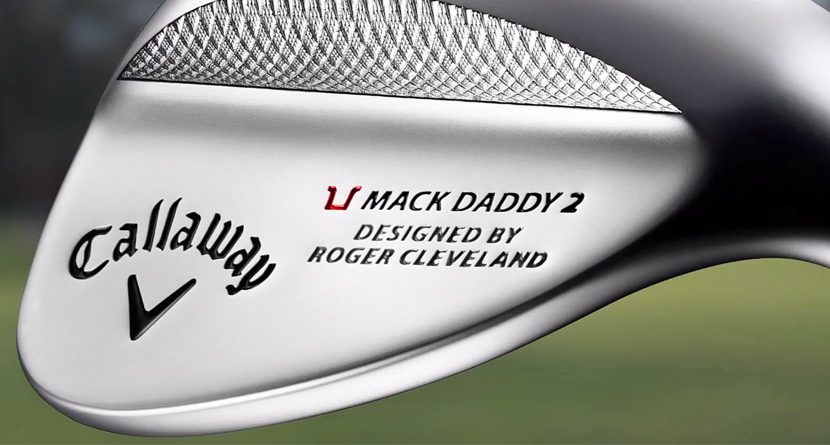 After Phil Mickelson’s 2013 British Open win, he did something that few Tour players do in their victory speech. He thanked the engineers at Callaway Golf for their support. And he followed that up with an impromptu thank-you tour of Callaway’s Carlsbad headquarters, a moment that went semi-viral on social networks.

Related Link: Roger Cleveland Gives Us a #Wedgeducation in Rap

Key among those designers was Roger Cleveland, whose previous company still bears his name. We got a chance to learn about the Mack Daddy 2 lob wedges from Mr. Cleveland, and both Production Manager Matt Fisher and myself scored some invaluable short game tips in the process.

The name “Mack Daddy” comes from a comment Phil Mickelson made after spinning one of his short range wedge shots 30 feet.

“Those are my Mack Daddy grooves,” said Mickelson.

The wedges took on the “MD” stamp, and later grabbed the catchy name in earnest as they were brought to market this season. “The grooves we released weren’t quite as a aggressive as the ones Phil tried then,” Cleveland told me. “But they push right up against the USGA limits.”

As for the three models, they come in an “S” (for staggered), a C, and a U grind, the latter being used by Lefty himself.

According to Cleveland, all models offer relief in the heal, so that when you open the face the leading edge isn’t too high off the ground.

The S model has a fairly basic 10 degrees of bounce, best for firm conditions. The C grind provides additional relief in toe, adding versatility. The U grind There are three custom sole grinds available in the Mack Daddy 2 Wedge line in both the 58- and 60-degree clubs:

The U-Grind, which Phil Mickelson inspired and uses, has a concave sole and the tightest radius of the three grind options, which significantly relieves the heel and toe. This allows the leading edge to stay low and under the ball when opening the face to add loft.

If Phil Mickelson elects to carry five wedges, and you’re carrying two or three, you may want to think about dropping a long club for a more versatile set of wedges, like the Mack Daddy 2.