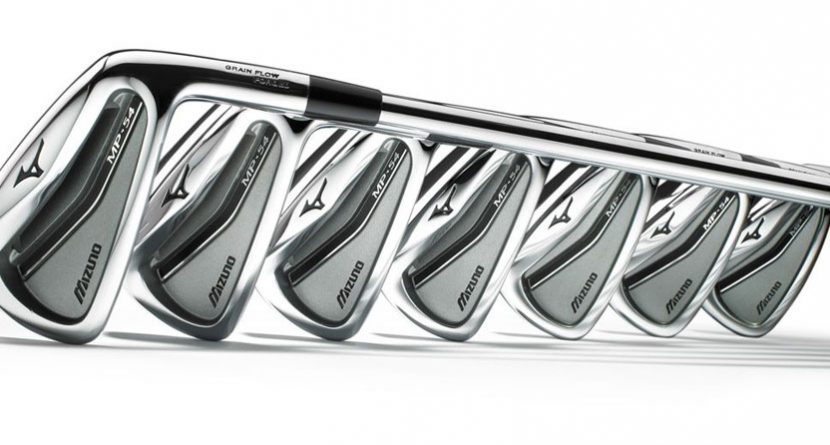 This week I had the chance to test out the 2014 Mizuno MP-54 irons; a player’s iron designed for 0-12 handicaps and for golfers who think they’re fancy. After just a few short minutes I instantly fell in love with these clubs, and for all the reasons you would suspect out of a golf club from Mizuno.

Oh Mizuno, how I love thee. Let me count the ways.

These puppies are made of thick forged metals crafted to allow for shot-shaping without sacrificing forgiveness in the clubhead. The 3-through-7 irons feature a pocket cavity to give you a little boost in distance (which is always nice) as well as added stability on miss-hits. The 8-through-PW irons are your meat-and-potatoes muscle designs, which promotes a consistent and expected strike in the scoring clubs. Club lofts are slightly on the strong side, which also helps distance.

The Mizuno MP 54s ship with a stock True Temper Dynamic Gold S300 shaft, but you also have an array of custom shafts from which to choose if you want more bells and whistles. The same goes for the grips, which come stock in Mizuno’s custom Golf Pride option.

First of all, Mizuno makes amazing-looking golf clubs. Everybody knows this, and the Mizuno MP 54s are no exception. The subtle black accents on the back of the irons add a little “modernness” to clubs while the topline, sole and head size scream “OH YOU FANCY, HUH?” If you see these clubs in a golf bag at the course, you know their owner is a player.

What was most appealing, as is usually the case for me, was how the Mizuno MP 54s felt at impact. The ball jumped off the clubface when hit pure, especially in the longer irons. I was surprised at how “muted” each shot felt, suggesting the cavity-back design was doing its job. The lower irons did feel a bit hard at times, but that was to be expected as they were more blade-like.

Overall, I was very pleased with my shot numbers. While distance was similar to what I get out of my current irons (PING S55), I would say the Mizuno MP 54s were slightly more accurate. The ball had a nice penetrating trajectory across all irons, which is attributed to the stronger lofts. I could absolutely do some damage with these clubs.

WHY YOU SHOULD BUY THESE CLUBS

If you are a low- to mid-handicap player (0-12), the Mizuno MP 54s should be on your short list of purchase options for 2014. Everyone can benefit from more distance in the iron category, and these sticks provide just enough to make a noticeable difference. You’ll also love the feel and look of the MP 54s, especially if you’ve played blades in the past.

WHY YOU SHOULD NOT BUT THESE CLUBS

Be honest with yourself. If you can’t break 90 on a regular basis, these clubs will not help you. While the Mizuno MP 54s are forgiving, they are most definitely not game improvement irons. You’d be better served by irons out of Mizuno’s JPX Series.

Related Link: Mizuno Wants You to Play Famously Once Again