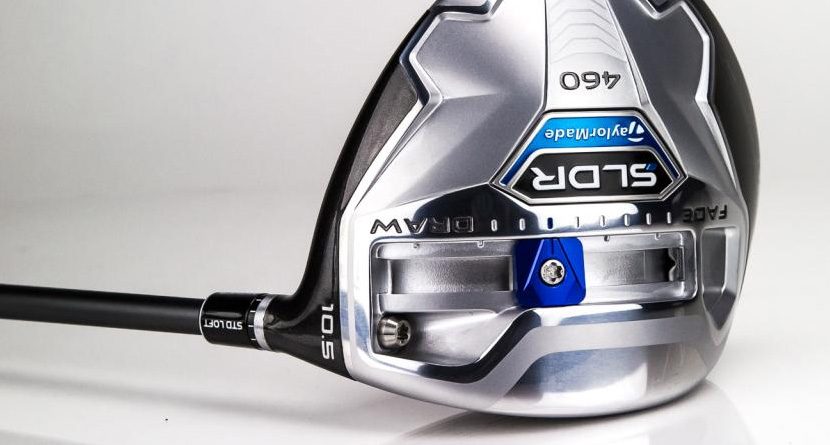 If you’ve been around golf for a long time you’ll remember the old adjustable iron, which allowed the loft to go from wedge to 2-iron by loosening a screw and notching a gear-like mechanism to the desired loft. Of course there was no way they could perform like the desired club, given the obvious limitations like length, stability, and lie angle. But the dream of carrying one club was there.

The TaylorMade SLDR kind of reminds me of that gear-like adjustment, albeit with a sliding weight on the sole which changes the driver’s bias from draw to fade with a simple “loosen, slide, and tighten.” TaylorMade achieved a similar effect years ago with their R7 Quad drivers which had changeable weights on the heal, toe, and rear. A similar system carried through to the R9, R11, and R1 — but all of them required carrying different weights. The SLDR is much easier and, heck, it’s new. And with the little blue weight being able to slide to 16 different positions, players will be able to dial it in to their desired ball flight very precisely.

The TaylorMade SLDR driver has been tested at recent events on the PGA and European Tour, and player reaction has been positive.

“The guys who don’t like it are the ones who already spin it low. For the guys who are high-spin long hitters, it goes a mile. I hit one 362 yards on 13. It’s a beast. With the sliding weight, I think you can pinpoint the right setting better. Some guys like a tinny sound; some like a thud. This is right in the middle. A lot of guys out here grew up playing drivers that were filled with foam. Those guys really like the thud sound. Earlier this week there were guys fighting over this club because they only brought like 20 heads.”

The 460cc SLDR driver has a charcoal crown, slightly different than the recently introduced R1 black, but continuing on a TaylorMade trend towards offering colors for players that for whatever reason don’t like a white club. Before that, all recent TaylorMade drivers (starting with the R11) had been white.

Like the last few offerings from TaylorMade, the SLDR has an adjustable hosel that provides different lie and loft angles.

The SLDR appears set for an August release.