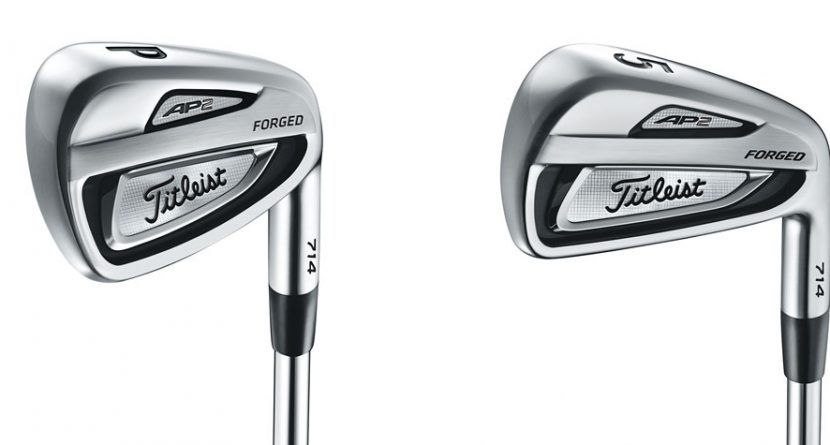 “The AP2 714 is as forgiving as our original AP1,” says Titleist VP of Product Marketing Chris McGinley.

And while many Tour players still play the brand’s traditional MB and CB irons – which have also received a minor makeover with the 714 release – the AP2 is played by a healthy percentage of Titleist staffers, such as Jason Dufner and Mateo Manassero. Surely these players aren’t in great need of an iron that gets a fat shot airborne. What they’re looking for is optimal distance and launch conditions without giving up workability.

As McGinley told me, “Tour players and better amateurs say they don’t need a forgiving club, but when we give it to them they like it.”

In the AP2 714, Titleist accomplishes optimal flight control through the set in a number of ways.

Let’s start by taking a look at trajectory control. You’re likely familiar with the concept of flighted shafts, where the long irons have a lower kick point than the short irons. Titleist accomplishes a similar feat through strategic placement of 43g of Tungsten, a heavy metal that is placed into the heel and toe of the long irons prior to the forging process. It’s a costly extra step that moves the center-of-gravity lower while increasing moment of inertia, or MOI.

Interestingly, the eight and nine irons have Tungsten plugs, but the wedge does not.

“If we didn’t need Tungsten, we didn’t use it,” explains McGinley. “Short irons tend to be struck higher on the club face, so we wanted the CG to be slightly higher.”

The set is also a bit stronger than the prior AP2, with the wedge at 45 degrees, but a 48 degree gap wedge marked “W” is an excellent addition to the set to ensure you don’t have a big gap. I recently played a set with a “W” and found it to be almost exactly the right club for 115 yards, at a nice launch for a tight pin, where the wedge could produce a more penetrating shot for the 120-130 yard distance, or when playing into the wind.

The standard shafts in the AP2 714 are True Temper Dynamic Gold. But an excellent option if you don’t have Tour swing speed or launch is the True Temper Dynalite Gold XP, available with no upcharge. I highly recommend doing some A/B testing with these shafts before deciding on which one is right for you. And as always, visit a Titleist Fitting Works location to get properly fitted before ordering your set.