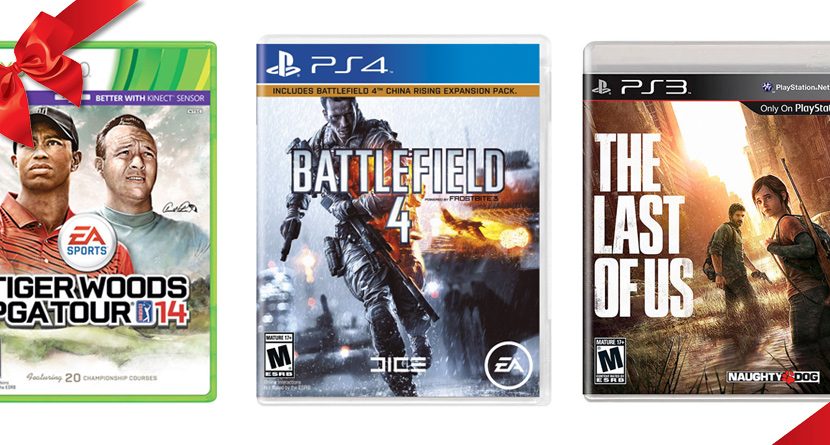 The holiday season is here whether you’re ready for it or not.  For those of you waiting until zero hour to pick up the latest and greatest video game for yourself or the gamer on your list, here is Back9Networks guide to the best video games gifts right now:

The last in the very successful line of video games from the Tiger Woods PGA Tour franchise, EA Sports and Tiger Woods recently made the mutual decision to end the series. Although this is the last Tiger Woods video game created by EA Sports, there will be many more games made in the series.

One neat feature of the game is the fact it’s compatible with the Xbox 360’s Kinect motion sensor. The downside for PlayStation 3 users is that they’re required to use a PlayStation Move to play. With winter underway, Tiger Woods PGA Tour 14 has a huge array of courses for players to try with various weather conditions. The game released in March, so it is available for less than some of the newer games on the market and you can find it on Amazon for around $40 on both major platforms.

The Last of Us (PS3 Exclusive)

With the zombie apocalypse a guaranteed certainty, why not get prepared with The Last of Us?  It’s a third-person shooter telling the story of two survivors, Joel and Ellie, after an epidemic that is caused by a deadly fungus. From the opening sequence, the story is not only compelling, but it keeps the player glued to the screen as our heroes attempt to survive a continuing onslaught of undead attackers. The latest in the ultra-popular first-person shooter series from DICE, the Battlefield series is known for its amazing online multiplayer, available for the Xbox 360, Xbox One, PlayStation 3 and 4, as well as Windows. Unlike Call of Duty, Battlefield have bigger maps, and allows players to operate vehicles. The game also features a single player story-driven campaign which takes place in the future and focuses on tensions between Russia and the United States.  Players control Sergeant Daniel Recker as he navigates his way through rollercoaster ride reminiscent of 80’s pulp action movies.

It’s not a game for everyone due to a heavy focus on historical action, but this satisfying adventure game, set in an open world in the Caribbean, is one of the best of the year. Players take the role of Edward Kenway, a former British privateer who’s became a pirate and member of the Assassin Order.  The open-world game is one of the few games produced lately which features detailed open-sea combat where players can fight on galleys and assume the role of swashbuckler. GTAV is widely praised by many gamers for its sandbox open world, where players can take the role of several main characters, all of which are interesting in their own ways. The game is so immersive that players can eat up a large portion of time without completing the storyline but by going to the movies, buying clothing or even playing mini-games like tennis and golf!

The online portion of the game is both hit and miss. Players are capable of interacting with anyone but most online players aren’t very friendly, which is why it is a good idea to play with friends… or just shoot the miscreants online. It’s currently available on PlayStation 3 and Xbox 360 and will soon be released for Windows. The Wii U was released prior to the PlayStation 4 and Xbox One, but has one feature that the other consoles don’t – backwards compatibility. The Wii U can play Wii game discs and old Nintendo console games from the Gamecube and Nintendo 64 which can be purchased on the Virtual Console. The Wii U has titles that are family friendly and is a great entertainment product that can be used for household gatherings and parties. If PlayStation isn’t your thing, the Xbox One won’t disappoint. It’s being touted as the “all-in-one entertainment system” and appears to be just that. You get the console and a Kinect sensor, and the system is voice-activated. Switch from video games to live TV instantly, or watch real golf and play video golf at the same time. Watch movies and Skype with friends at the same time. Or surf the web. Or play music. Regardless, leaving the house will become a real chore. The downside of purchasing either console will be the high demand for both, so expect to see consoles selling out online and in retail stores. Don’t wait last minute if you intend to purchase One. Seven years after its third version, Sony’s latest and greatest PlayStation is available just in time for the holidays. New features include downloading games from your PC and sending them to your console; sharing screenshots or livestreams via social media; an upgraded DualShock controller; and apps like Netflix and NBA Game Time.