Got Game? JustOne Golf Brings An Arcade To The Course 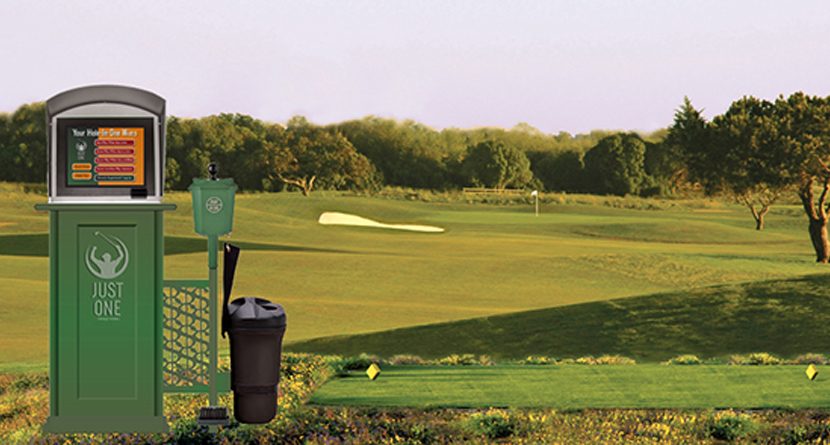 If you’ve ever played in a golf outing before, you’ve probably participated in a hole-in-one contest on the course’s par-3 holes. These games are usually manned by a golf pro or another course employee that serves the dual purpose of contest banker, judge and bartender. Wouldn’t it be nice if there was a way to automate this type of thing?

Luckily, the folks at JustOne Golf had the same thought.

The JustOne Golf game system — which has officially launched in Georgia and Nevada — is the golf industry’s first fully-automated, on-course skill challenge. The main console kiosk (cleverly coined the TeeOsk) looks a lot like an arcade or video game you normally see in any sports bar, while a high-circuit video camera monitors your golf shot near the green. Many different game modes are available on the console, including Closest to the Pin and Hole-In-One.

“The JustOne system puts more excitement in every round and meets a real need for today’s golf generation,” Rattner said. “Never before has there been a game platform that aligns with the personal motivations of the golfer to have fun, compete, be entertained and have the opportunity to be handsomely rewarded for their skills.”

How handsome is that reward? One lucky golfer in Atlanta pocketed a $10,000 prize for scoring an ace on a JustOne-sponsored hole.

The system also benefits the course on which it’s installed, as Rattner explains further.

“Benefits for the golf course facility also abound with increased revenue in all areas of operations, including food and beverage and pro shop sales, as well as increased rounds, repeat business, and word-of-mouth referrals and viral social media exposure,” Rattner said. “Additional bottom line-boosting potential for the facility includes the opportunity for media exposure-driven publicity as well as improved advertiser, sponsor, and corporate event revenues. The revenue ripple effect is seemingly endless.”