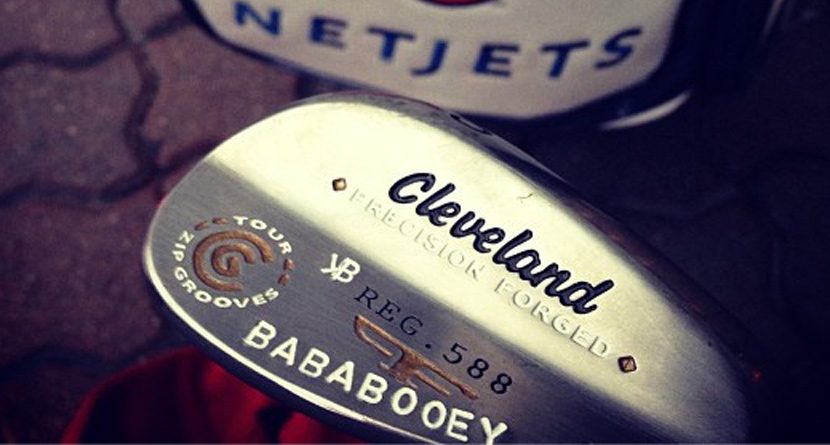 He still hasn’t received the coveted golden ticket to meet the man himself, but Keegan Bradley’s lifelong love affair with Howard Stern continues, thanks to the good folks at Cleveland Golf.

Bradley, a huge fan of the Stern show and all things Howard, has never hidden his affection for the King of All Media and the Baba Booey screams that have proliferated tournaments lately. He was heartbroken when friend and PGA Championship winner Jason Dufner was asked to appear on the show recently, and said so via Twtter.

His loyalty has started to pay off though. In addition to appearing on Stern’s Wrap-Up Show with Baba Booey himself (Gary Dell’Abate, the Stern show’s executive producer), Bradley was just presented with a one-of-a-kind personalized wedge from Cleveland Golf stamped with the phrase that’s been haunting Ian Poulter and other golfers over the last year. As you may remember, a week after PGA Championship winner Jason Dufner appeared on the Howard Stern Show – the first pro golfer ever to do so after winning a major – Stern’s biggest golfing fan got the next best thing: Keegan Bradley appeared on The Wrap-Up Show with Dell’Abate and Jon Hein. The golfer clearly enjoyed his time on the Wrap-Up Show, and it’s safe to say that if he wins a tournament anytime soon, he’ll get time with Stern himself. Until then, Bradley’s cool hanging with the Stern staffers.

“If anybody from the Howard Stern Show wants to play golf with me,” he said, “I’m in.”

Other highlights from the show: Keegan Bradley on Howard Stern Wrap-Up Show