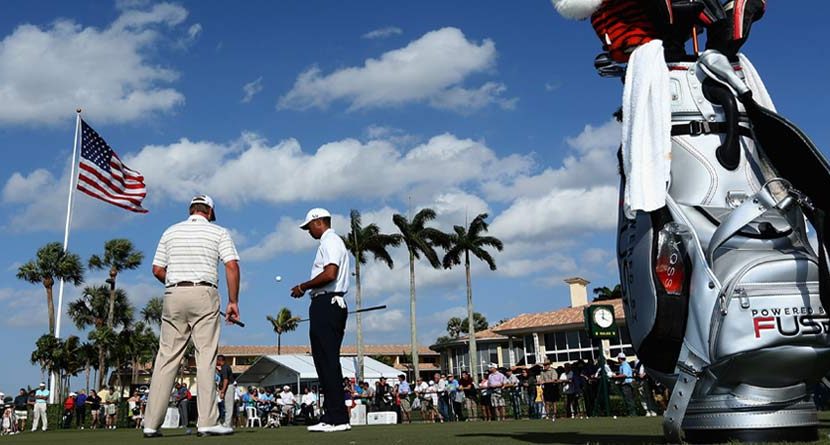 Tiger Woods picked up his 76th PGA Tour win on Sunday at TPC Blue Monster and the WGC-Cadillac Championship. A Nike Golf man through and through, Woods used Swoosh equipment and wore their threads for his second win of 2013.

As most any golf fan knows, Tiger is a long-time Nike Golf staff player and uses Nike equipment exclusively. Tiger’s driver is the Nike VR Tour with 8.5 degrees of loft and a Graphite Design Tour AD DI6 shaft. His fairway woods include a 15-degree Nike VR Pro Limited Edition 3-wood and a 19-degree VR/S Covert 5-wood, which he put in the bag this this week instead of his trademark 2-iron. Both fairway metals feature a Mitsubishi Diamana Blue Board 103X shaft.

Overall, 2013 TW Collection from Nike Golf has impressed to date with Tiger sporting the memorable TW Modern Color-Block Polo and the TW Stripe earlier in the week.

Tiger continues to wear the Nike TW ’13 golf shoe, a shoe inspired by the Nike Free trainer. As for Tiger’s formula for choosing his shoe color, one must look to his hat and belt. A white hat / belt combination brings white shoes, while a black hat / belt combo brings, you guessed it, black shoes.