Maginnes on Tap: Discussion Over? 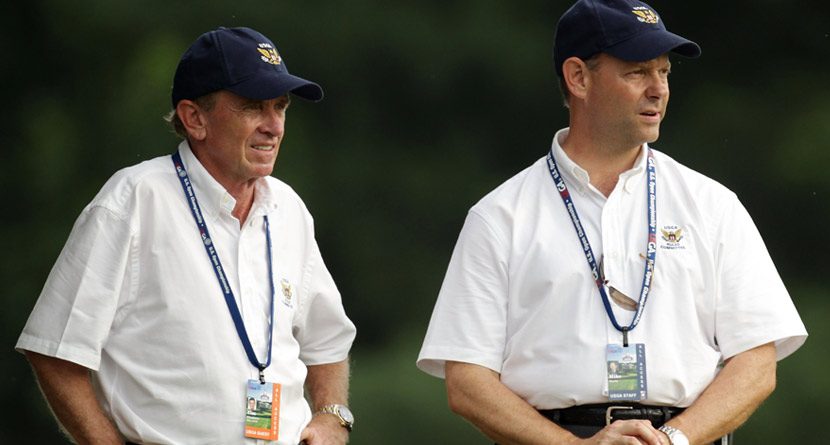 You don’t want to play politics with Tim Finchem.

On Sunday during the final match at the Accenture, Tim went before the golf world and stated that, like the PGA of America, the PGA Tour would not support the anchoring ban proposed by the USGA and the R&A.

What he didn’t say was just as important as what he did say. When asked on Sunday if, “he could see a day when the USGA and the R&A outlawed anchoring yet it’s allowed on the PGA Tour?” Finchem was less than forthcoming.

“I haven’t spent much time worrying about that,” the PGA Tour Commissioner stated. “That would be speculation, and I haven’t really thought about that. I’ve thought more about some other areas of bifurcation, whether it would work or not.”

What does that mean? The truth is that I don’t really know. But having been a part of the PGA Tour for more than two decades I can tell you that Tim Finchem has considered every possibility. He is a brilliant strategist who has taken the PGA Tour from a few hours of television coverage a week to the mainstream. The purses have increased by several hundred percent under the Finchem regime, and the Tour has experienced growth in a way that few could have imagined much less orchestrated.

Biographies are written about men like Tim Finchem, but I don’t want to turn this into one. I mention these accomplishments and the fact that before becoming the commissioner Tim is a lawyer who worked as a White House advisor to Jimmy Carter and later formed an incredibly successful marketing strategy firm in D.C.

There isn’t a players union (all attempts to form one have been quashed) or a unified position. Rory McIlroy believes that the Tour should simply follow the USGA and the R&A’s lead. Ernie Els and Keegan Bradley have a different view.

So when the discussion was placed before the player representatives the decision was made to oppose the ban in the broadest sense possible. If the Tour’s intention was to flex its muscle it would have simply come out and said that they would form their own set of rules. Instead, under Finchem’s watch, the Tour presented a seemingly innocuous position forcing the USGA and the R&A to make the next move.

It was in this subtle position that the playing field changed. While this will fundamentally remain a debate about anchoring on Sunday the PGA Tour made it a discussion about who makes the rules. Amazingly this was done without undermining the current authority of the USGA and the R&A. Finchem played classic match play on Sunday and has now put his opponent in a position to make its own mistakes.

Later on Sunday the USGA released a statement applauding the 90-day discussion period that ends on Thursday concerning the proposed anchoring ban. Furthermore they said, “It is our plan to take final action on the proposed ruling in the Spring.”

Something tells me that regardless of when the discussion period was scheduled to end the discussion between the powers that be is just getting started.

The worst thing that could happen here is for the USGA to conduct the U.S. Open under one set of rules while the PGA Tour plays week to week under a separate set of rules. This isn’t good for the game or for the rules of the game. Everyone knows this. But most importantly the USGA better pay attention to it.

The next move will be made by Mike Davis and the USGA. Whatever the next move is, it will be critical to not only those who putt with a belly putter but to the credibility and accountability of the game’s governing bodies.  So far, and in some cases quite surprisingly, every move that the USGA has made on this issue has been countered strongly. This next move will meet with the same scrutiny. Now that the PGA Tour has entered the fight  the stakes and the profile of the conversation have been raised.

Up to this point the USGA has been playing a nasty game of checkers. Tim Finchem is playing chess.