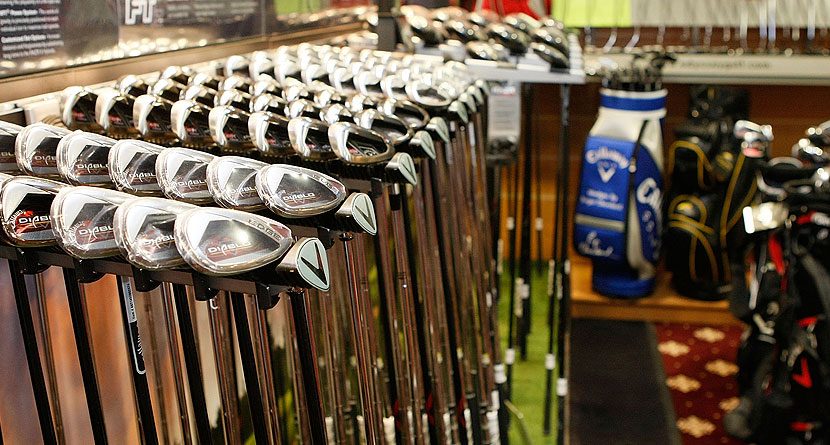 It’s a safe bet that you or someone you love is a golfer. It’s also a pretty good bet that that person is one of the toughest people on your list to shop for. Why? Because golfers are particular, because most of us will spend money on ourselves throughout the year and accidentally ruin great gift ideas for you mothers, fathers, spouses and children who are desperately seeking new gift ideas.

With zero hour quickly approaching, here are some ideas about what’s hot and what’s not in the golf world this holiday season from some of the nations’ top retailers.

Golf and Ski Warehouse is one of the premier golf retailers in the Northeastand one of 18 Callaway club-fitting centers in United States. According to Golf and Ski Warehouse COO Ned Waters, among the runaway favorites this holiday season have been GPS watches. Perennial favorites like Titleist ProV1 golf balls and general apparel are also hot.

“Apparel is outperforming all other categories. There is not that one ‘must-have’ hard, good item driving traffic right now,” Waters said, but “GPS watches are hot. We are selling a significant number of watches from SkyCaddie, Garmin and Bushnell.”

Looking past the 2013 holiday season and forward to the new year, Waters said, “The Callaway Big Bertha driver has a chance to get really hot. It would be nice to start selling $400 and $500 drivers in volume again.” Callaway has officially set the release date for the Big Bertha for Feb. 2.

Despite these trends, Waters said, “Maybe it is all the snow on the ground, but golf sales are slow this holiday season. Fortunately, we have the ski side to offset it.”

At Carl’s Golfland in Michigan, many of the same trends are being reported.

Along with these matching trends of Titleist golf balls and GPS watches, Bildstein also noted that there has been a change in the market for golf shoes.

“The trend in footwear seems to be moving toward a more athletic, spikeless shoe,” Bildstein said. “This is very different from the traditional saddle-style spiked shoes that we have seen over the past several years. We have also sold a lot of the Nike Grillroom casual shoes this holiday season.”

Looking forward to 2014, Bildstein expects similar trends across the country.

“We have seen most of the 2014 hardgoods product introductions at this point,” he said. “We expect the Callaway Big Bertha wood product to do well. The Big Bertha Alpha driver is a very innovative, cool product. We also expect the TaylorMade SLDR driver to sell well in the spring also.”

Along with these trends, Bilstein also said, “We have sold several gift cards and certificates for Launch Pad custom fittings this holiday season,” which is a fantastic idea for those of you still scrambling for golf gift ideas.

In Hartford, the pervasive trends are nearly identical to those seen at the other two locations. David Lavoie at Golfers’ Warehouse said that GPS range finders and Titleist ProV1’s were also major movers at his store, just as they were at the other locations. As far as overall sales trends during the holidays, Lavoie said, “Nothing is really not selling. New products tend to sell well around the holidays, so when a company launches a new line, we see an increase in the woods and iron lines.”

Looking forward to the new year, Lavoie said, “All the new iron sets from the vendors are going to be hot sellers for 2014. Callaway Apex and the new 714 line from Titleist are out now and doing well. There hasn’t been any real differences in trends from seasons past.”

Lavoie summed up the holiday season by saying, “As a retailer you go into [the holiday season] knowing what to expect. New hot products will be good sellers, we will sell a lot of golf balls, clothing, and accessories, as well as gift cards.”