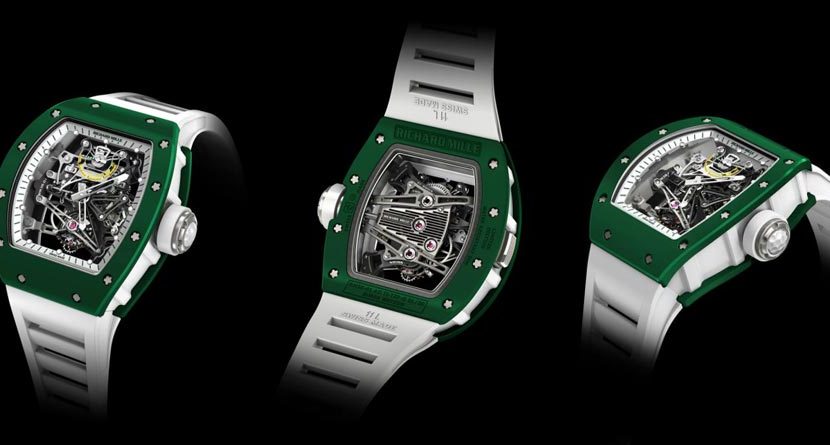 After the success of the limited RM 038 Golfer’s Tourbillon released in 2011, Richard Mille decided to develop yet another specific tourbillon watch for Bubba Watson with added functionality to complement his powerful drives on the course.

The result is the RM 38-01 Bubba Watson, a timepiece that combines a patented G-sensor with a tourbillon mechanism, which helps golfers by providing new insights into their games. The mechanical G-sensor, a Richard Mille world first, allows the user to see the accumulated motion of their swing in G’s. The sensor, placed under 12 o’clock, is able to record the force generated by a golfer’s swing, specifically during the last segment. In reality this means that the RM 38-01 can record up to 20-G’s of acceleration, a very important insight for golfers such as Bubba Watson, renowned for his ability to hit a ball at more than 310 kilometers per hour.

Released in an edition of 50 pieces worldwide, the RM 38-01 G-sensor Bubba Watson provides all golfers with new insights about the strength of their swing and thus allows them to better adapt the power of their technique accordingly to the playing requirements of each course they compete on.

Check out this RM 38-01 Tourbillon Bubba Watson timepiece, as well as the brand’s other luxury offerings, at RICHARD MILLE.

The game of golf is evolving. MINOR|HOUSE helps you move with it. Founded in 2012 to serve as the singular portal for all things golf fashion and lifestyle, MINOR|HOUSE keeps you informed with the latest information on golf clothing, footwear, and accessories from the biggest corporations to smaller boutique operations. In INTERVIEWS, we also chat with key players and interesting people from not only golf, but all walks of life, to provide an unrivaled and fresh perspective on the game of golf, the world of fashion, and the lifestyle that it all entails.