The (Link)soul of John Ashworth 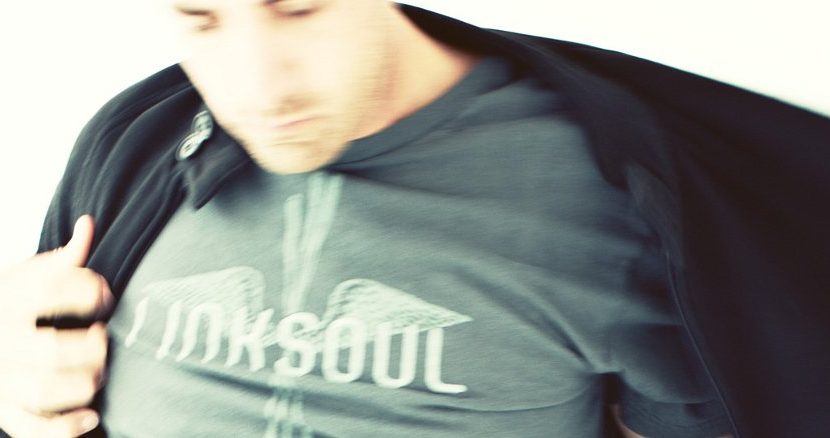 Having maintained watch over John Ashworth’s storied career the irony of the scene was inescapable.

There on a wall at the entrance to TaylorMade-adidas gigantic booth at this year’s PGA Merchandise Show was a digitized projection of the iconic Golf Man, the inspirational logo Ashworth himself helped nurture into an apparel industry sensation 25 years ago. As recognizable in the game as the Titleist script, Nike Swoosh or adidas Three Stripes (more irony) the large projection was emblazoned by an overlay of Ashworth’s name, a continuing tribute to the brand he founded but one which resides now under the ownership of TaylorMade-adidas Golf.

Even more ironic: John Ashworth’s Linksoul booth was right in the crosshairs of the projection – side-by-side in fact.

“It’s crazy isn’t it? It seems weird to be literally in the shadow of it,” Ashworth said during an interview at this year’s show.

“That was such a great part of my life and sure it is my name and it’s The Golf Man up there so I’ll always feel some sentimental value and attachment to it. It’s still kind of my baby. But I don’t really think about it much now. I’m more focused on what’s ahead and not as much about looking what’s behind me. Do I follow what they (adidas) are doing with it? I do but only from a very peripheral view. It’s got a life of its own now. Today, I’m completely engaged with Linksoul.”

Positioned by Ashworth as a combination of philosophy and golfing culture, Linksoul is moving into its second full year in the marketplace. Having gone through a “blessed” career where he combined California surf culture with the traditions of Scottish links golf to form Ashworth; where he took a life-inspiring course design sabbatical around the golf rich East Lothian area of Scotland; where he spent time designing golf clothing for Quiksilver, then for Fidra and finally a second go around with Ashworth, Linksoul is the well-intentioned merging of John Ashworth’s career experiences.

With a non-political golf centric mantra of “Make Par, Not War,” the brand’s quest is admirable. It seeks to reconnect people with the soul of the game.

“We make clothes for our friends and the people we play golf with knowing the golf world is a small place,” Ashworth says. “Linksoul is about an attitude and a culture. Personally, I think our culture translates. It inspires. We’ve seen it.

“Golf for me is a special fraternity. At Linksoul we don’t want to just make golf apparel, we want to make apparel for golfers. There’s a big difference there. A core golfer these days plays once maybe twice a week but golfers are always thinking about the game. They want to feel it. People wear Linksoul as a showcase of their sport, of who they are. That’s my motivation. It’s what drives me.”

Ashworth admits to being sidetracked during his inaugural season with Linksoul. Having partnered with Mark Killeen and Pima Direct, the two golf industry veterans put together a full turn-key, custom-branded and design-merchandising solution for the green grass channel. It was a new idea that appeared to have promise. Trouble was the partnership became problematic. It was diverting both individuals attention away from their core strengths.

“Last year was a bit weird for both of us,” Ashworth says. “It’s why we went our separate ways. What it’s done though is free both brands up and allowed us to concentrate on what we do best without distractions. We were just to scattered trying to do two things. This business is tough enough when you’re focused on one thing. We’re already seeing a better response from the industry.”

For the uninitiated, Linksoul is a bit of an apparel hybrid. It blends casual with sophisticated, doing so with products perpetuating golf and lifestyle. But the line is ingrained with a touch of edginess making it standout – without actually doing so. Ashworth contends that in some ways he purposefully seeks to under design. Maintaining a comfortable distance from what he calls “the golf uniform” look is a priority.

“Our placement in the market fills a little niche,” he said. “We’re definitely different in terms of fabric, colour and overall look. The cotton fabrication is softer, so are the textures, the colours. I don’t want it really in your face. What we want is to bring back a hint of tradition with a twist on newness while staying a bit understated. What’s been to our benefit is the Linksoul demographic. There is none. It’s boundless. It’s proving to be timeless and ageless in that sense. We have teenagers buying it and guys in their 60s who love to wear it. Our stuff blends into the whole lifestyle dynamic.”

“The guys love it because it fits who they are as individuals not just as professional golfers,” he says.

John Ashworth has done for golf apparel what Karsten Solheim accomplished with perimeter weighting; what Gary Adams did with the creation of the metal wood; what Ely Callaway did with the first oversized driver.

He revolutionized it. He raised the bar. By cobbling together cotton fabrication with a distinctly GQ “cool” factor then putting it on long-time friend Fred Couples, he turned Ashworth into an aspirational brand a quarter-century ago that shifted the fashion paradigm. That same attitude and philosophy is now what guides Linksoul.

“This is a lifetime commitment for me,” Ashworth says. “I love the people I’m working with and the culture we’re creating because while our foundation is golf Linksoul is also about living by the coast, by the Pacific Ocean. It’s relaxed. It’s artistic. Our showroom is a gallery. Were trying to connect art and golf and taking that to a broader audience. We’re learning about ourselves as we go along and we want golfers to join us there sometime – except on Fridays. At Linksoul golf is still mandatory on Fridays.”