To Push or Not To Push a Cart:<br /> Tour Pros Weigh In 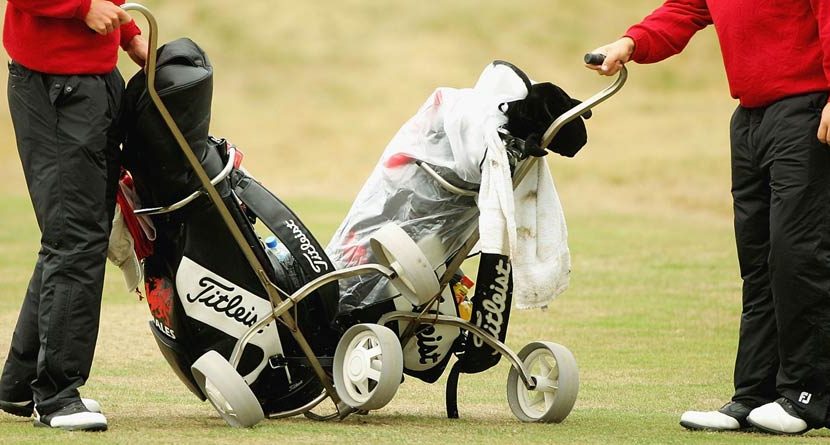 Ah, the great push cart debate. Well, it’s not really a debate at all, but PGA Tour players have turned it into one on Twitter … kind of.

Related Link: Pulling a Cart Can Be Tough, So This Robotic Cart Follows You

Players during the 2014 NCAA golf championships have been using push carts during their rounds, most notably the Stanford Cardinal team. Players have their own reasons for using a push cart, be it an injury or attempting to increase stamina, but the reason behind it doesn’t seem to affect the opinions of some.

Stanford’s Cameron Wilson used a push cart, likely due to a previous back injury, during the championship, and won the individual title in a playoff over Georgia Tech’s Ollie Schniederjans. Coincidence? We may never know.

While it may not be much of a two-sided argument – because most pros are against using them in tournament play – it does make for an interesting conversation:

It’s the original fitness fanatics vs the push cart this afternoon!! #GoPokes

No dog in the fight, but you can’t win NCAA with a pull cart. C’mon man

Agreed 100 %RT @TDESPN: @bovanpelt Push carts are a BAD look for these kids. C’Mon Man, how can a college kid not be carrying his bag?

@BigEinBigD @OSUtjaka OSU golf got made fun of when they brought out bags with stands. Push cart probably is smart but I just couldn’t do it

2 things not right as I’m watching the NCAA golf 1 that its televised so extensively and http://t.co/us7LstJj8D events get none 2 pull carts

Can only imagine what Coach would of said if we wanted to use a push cart!! @bovanpelt @OSUtjaka

@BigEinBigD I can’t remember ONE guy EVER using a pull cart in college. That’s one step away from retirement, not the PGA tour. #soft

If these pros have a problem with using a push cart, I’d hate to hear what they’d have to say about this robotic cart that follows you around the course … or maybe I’d love to hear it.

The NCAA Championships continue through Wednesday, with LSU and Alabama squaring off in one semifinal match, and Stanford and Oklahoma State in the other.